In the latest public lambasting of his own Attorney General Jeff Sessions, President Trump is once again citing Sessions' recusal from the ongoing Russia probe as a thorn in the presidency's side. In an interview with The Hill TV, Mr. Trump bemoaned, "I have no attorney general."

It's the most recent attack the president has made since telling Fox News last month that Sessions "never took control" of the Justice Department. In response to those attacks, Sessions, in a rare move for the nation's top cop, said that he would "not be improperly influenced by political considerations." Mr. Trump meanwhile says he's saddened by Sessions' performance in light of his early support of the Trump campaign.

"I'm so sad over Jeff Sessions because he came to me. He was the first Senator that endorsed me. And he wanted to be Attorney General, and I didn't see it," he said.

Mr. Trump added, "And then he went through the nominating process and he did very poorly. I mean, he was mixed up and confused, and people that worked with him for, you know, a long time in the Senate were not nice to him, but he was giving very confusing answers. Answers that should have been easily answered. And that was a rough time for him."

The president, however, appeared to suggest his disdain for his attorney general goes farther than just his recusal from the Russia investigation, citing issues at the southern border. "I'm not happy at the border, I'm not happy with numerous things, not just this," he said.

The president reiterated those frustrations on the White House South Lawn on his way to North and South Carolina Wednesday, saying he's disappointed in Sessions for a number of reasons.

CBS News' Paula Reid reports that despite the president's disappointment, Sessions has done almost everything within his authority to appease the Mr. Trump's long-promised agenda for tackling immigration issues including expedite deportations, end the Obama-era Deferred Action on Childhood Arrivals (DACA) program, staff up immigration courts, limit the number of asylum seekers and block grants from sanctuary cities.

Asked if the president would move to finally fire Sessions from his post amid months of ongoing public attacks, Mr. Trump told The Hill, "We'll see what happens."

"A lot of people have asked me to do that. And I guess I study history, and I say I just want to leave things alone, but it was very unfair what he did," he said. 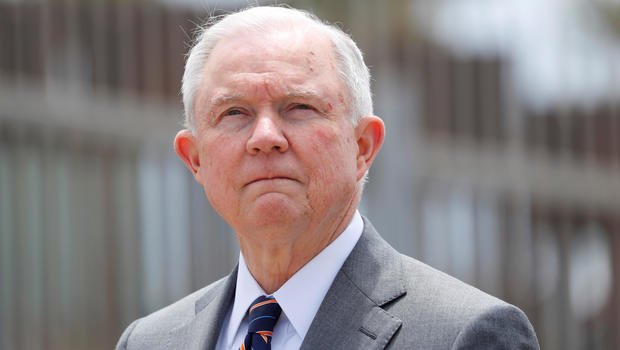 “This is corruption”: Warren slams secret meeting between Trump and Zuckerberg