Many older Americans who have retired from their previous jobs are returning to the workforce, a process some are calling "unretiring."

The main reason for seniors choosing to return to work is unsurprising–money, according to a survey commissioned by senior care provider Home Instead that drew responses from more than than 1,000 "unretired" people, as well as those nearing retirement, in the U.S. and Canada. But the second-most common reason was fighting boredom, with 44 percent of respondents citing it as the reason they jumped back into employment.

In part, the trend reflects the widespread shortfall in Americans' retirement savings. A recent Transamerica Center for Retirement Studies report estimates that workers' median retirement savings is only $71,000, far short of what experts say is needed to retire comfortably. Only 30 percent report accumulating $250,000 or more. Meanwhile, the number of older Americans filing for bankruptcy has surged fivefold since 1991.

While financial necessity is driving many older Americans to get a job, more than half of retirees age 50 and older are open to working again if the right opportunity comes along, according to a 2017 report from the Rand Corporation.

Around 39 percent of workers over age 65 who were currently employed had previously retired, Home Instead found. Of those that do come back, nearly two-thirds changed their line of work.

For former hairdresser Nancy Kading, back problems forced early retirement from her 26-year long career. But she wasn't ready to stop working.

She decided to come out of retirement and become a caregiver.

"It's important that I do something, and I think we are meant to help other people. We aren't meant to just sit and do nothing," Kading said.

"Actually just yesterday, I had a caregiver call and she was just like, 'You know, this is the best second career I've ever had.' " 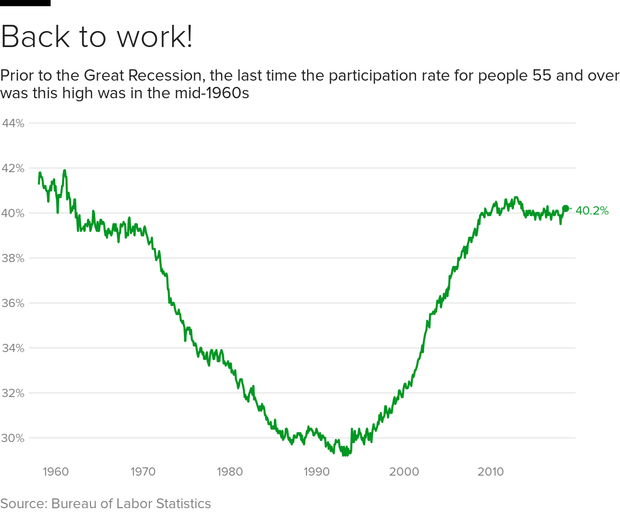