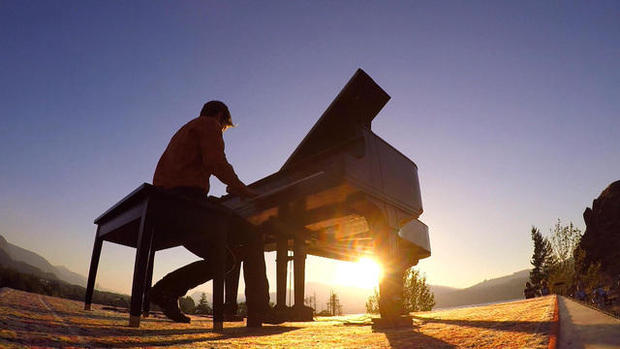 In the cliffs and tall trees of northern Oregon, a place of spectacular beauty, the unexpected floats through the air – the elegant melody of classical music.

"My mom and I were just saying, 'Wouldn't it be cool if you could just have a piano and go anywhere?'" Hunter Noack said. So that's what he did, traveling across the Pacific Northwest and introducing classical music to new audiences in some wild places.
"I could do a show pretty much every day and be happy," Noack told told CBS News correspondent Jan Crawford.
He tows his nine-foot Steinway piano all over the state with a pickup truck and a flatbed trailer. With the help of a few friends, the flatbed becomes a stage.

"I wanted the same piano that's in Carnegie Hall and that's in all of the major halls," Noack said. "And this is the same instrument. And in a way, I feel like it fits, because then this, these are our halls. You know, the Columbia Gorge is our cathedral, and the Alvord Desert is our church."

Noack grew up hiking, fishing and hunting in Oregon. He left to follow his dreams – classical music training in the States and overseas. But he decided to come back to where he came from, leaving behind the grand concert halls for the grand outdoors and taking what he loves back to the place he calls home.
On the night we visited, it was on a cliff jutting into the Columbia River. Noack said there are more distractions when playing outdoors, but he pointed to the upsides.

"I love to just be able to close my eyes or between pieces, take a breath in, fresh air – I think it affects how I play," Noack said.

Noack performs in the landscape spaces with astounding natural beauty and rich history.
"You're taking this, like, beautiful music to places where people would not have access to it," Crawford noted.

"Yeah," Noack responded. "You know, we have the people that come from Portland and Eugene that are classical music lovers that get to explore these parts of the state that they otherwise might not. And then we have people that are coming to these places that are familiar to them. Places they go fishing, places they go camping… it gives people sort of a different lens through which to see this land that they know and love."
He makes the surroundings part of the performance. On the land owned by the Native American Warm Springs tribe, Noack performed with James Edmund Greeley.

In this reimagined concert hall, Noack hopes to remove the normal barriers to classical music. There are free tickets, casual clothes, and the opposite of formal seating – like perching on a rock overlooking the stage. A third of his audience has never attended a classical music concert. But even those who have likely haven't done it like this: wearing wireless headphones to encourage wandering.

"With the music in your headphones, the music becomes a soundtrack to your experience in the landscape," Noack said. He's winning over the classical skeptics.
"I said to my friend if she would have invited me to a classical music concert, I would have said 'nahh' but this was tremendous," audience member Meg O'Brien said.

"I am speechless. Very speechless," Ana Marie Reid-Dixon said. "There was nothing artificial here, it was all natural. Natural surroundings. Yes, indeed."
It's a new community Noack hopes to create each night, out on the edge of nowhere.
"I hope that they find little moments of magic," Noack said. "It's those little moments… that draw people's emotions, that like give them space to feel something and to notice the beauty around us … And even for an hour, wander wherever they want is something totally worth doing."

"And they're finding that magical moment with people that they may think they have nothing in common with," Crawford said.

Noack wants to make sure anyone can go to these concerts, especially to the people who live around the places he performs. Now he's considering taking this outside his home state for concerts in the wild all over the country. 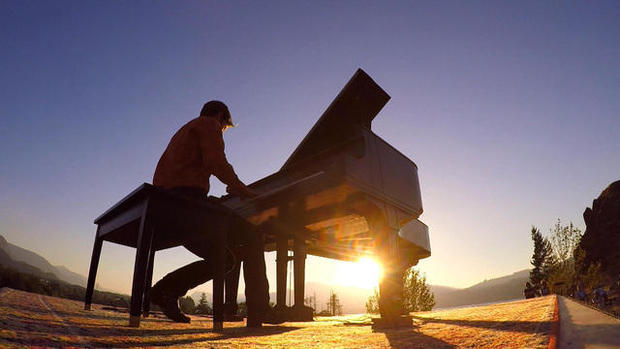 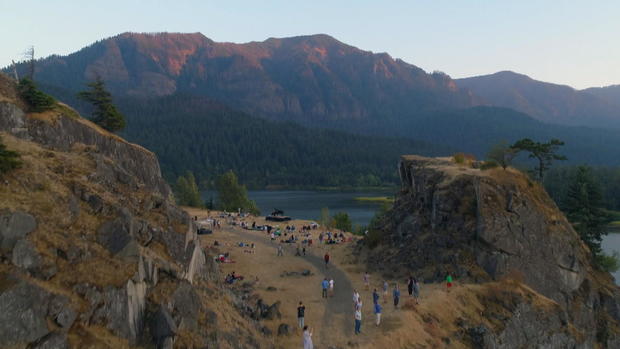