It's good to be a married man in America. That's because married men significantly out-earn single men as well as both married and single women, according to new research from the St. Louis Fed.

For women, marriage offers only a small wage benefit, which disappears once women enter their late 50s and 60s, the report found.

Of course, the big question is of the chicken-and-egg variety. Do married men earn more because they tied the knot, or did they get married because they are higher-earning individuals? The answer isn't clear, but the latter could be the case, writes research officer Guillaume Vandenbroucke of the St. Louis Fed.

"It might be that men with higher wages are more likely to marry; therefore, the average married man earns a higher wage than the average single man," he noted.

The findings reinforce earlier research about how gender, marriage and children impact earnings. The marriage premium for men extends across racial groups, with black men earning at least $12,500 more than their single peers, according to a 2014 research paper from the conservative-leaning American Enterprise Institute.

And it's not a new phenomenon, with economists noting the difference in married and unmarried workers' wages for decades. But it bears increased scrutiny at a time when marriage rates are declining, with only about half of U.S. adults married today, down from almost three-quarters in the 1960s, according to the Pew Research Center.

Education, income and marriage may be tied up in the question of why marriage delivers higher income for men.

College-educated Americans are much more likely to be married than those with only high school diplomas, creating not only a marriage gap, but an income gap.

Americans without a four-year college degree now earn less than they did in 1979, according to research from the left-leaning Economic Policy Institute. College-educated workers, meanwhile, enjoyed wage gains of about 16 percent over that time. Americans with graduate degrees saw their income rise 30 percent.

At the same time, there's evidence that lower-income men are having trouble getting married. With fewer job opportunities, thanks to a decline in manufacturing and increased automation, blue-collar men are suffering from lower income and increased risky behavior, according to 2017 research from MIT economics professor David Autor. That's hurt their marriage prospects.

Still, a college education doesn't explain everything, according to the AEI's research. Men who are married tend to work more hours than their bachelor counterparts, they found. Dubbed the "marriage effect," they posited that wedlock provides men with higher motivation to work and support a family.

"This suggests that the institution of marriage continues to boost men's commitment to work and the individual economic success they enjoy," they wrote.

Women's wages, however, deliver an entirely different set of questions, ranging from the gender pay gap to the impact of children.

Married women and single women earn similar annual wages, which Vandenbroucke describes as "surprising" since married women are more likely to have children, which often coincides with a decision to cut down on work hours or to step out of the workforce for a period of time.

The similarity in pay between married and single women doesn't support the view that "the gender wage gap results from women having children earlier in life and losing ground in human capital accumulation relative to men," Vandenbroucke noted. 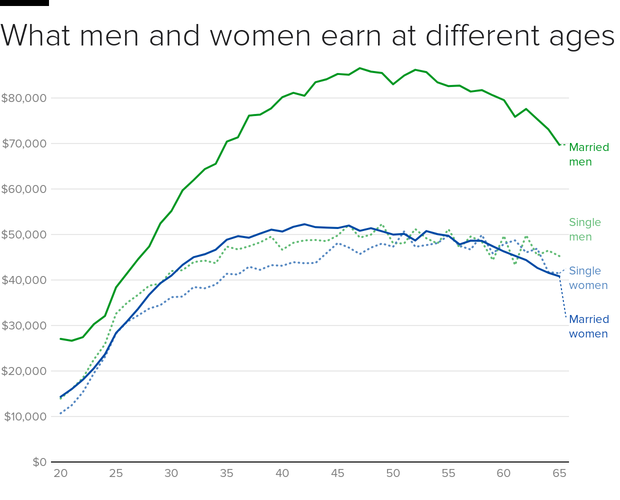 Levi Strauss IPO may be among biggest consumer offerings in a...