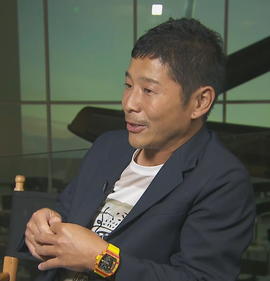 Yusaku Maezawa is the first passenger to book a trip to the moon on a SpaceX rocket. The Japanese billionaire paid an undisclosed amount to ride on the company's new Big Falcon Rocket, which SpaceX CEO Elon Musk said will cost $5 billion and could be ready as early as 2023.

In front of a packed house at the company's headquarters Monday, Musk introduced his newest partner in space exploration.

"I thought about how I can give back to the world, and how this can contribute to world peace. This is my lifelong dream," Maezawa said.

"I'm not afraid at all…I trust him, and I trust [the] SpaceX team," Maezawa said.

Maezawa, the founder of Japan's largest retail website, purchased every seat on the trip and plans to bring up to eight artists along for the ride. After their journey, the artists will be asked to create something inspired by the trip to "inspire the dreamer within all of us," Maezawa said.

The Big Falcon Rocket will be nearly 400 feet long and equipped with a reusable booster rocket that will produce 200 tons of thrust. The plan is to send passengers around the moon and back – a more than 475,000-mile journey – in about five days.

Musk predicted the spacecraft could be ready by 2023 but the company has had problems meeting deadlines in the past. Its last rocket, the Falcon Heavy, had its first successful launch nearly five years later than planned.

"It's not 100 percent certain that we succeed in getting this to flight [by 2023]," Musk said. "But we're going to do everything humanly possible to bring it to flight as fast as we can and as safely as we can."

It's a risky investment 42-year-old Maezawa is willing to make for a shot at a lunar legacy. 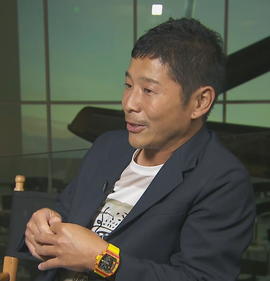 Beyoncé scores 9 Grammy nominations, including song and record of the year