By Irina Ivanova MoneyWatch September 18, 2018, 2:34 PM Tesla has turned over documents to U.S. Department of Justice

Shares of Tesla dropped on Tuesday on news that the electric car maker is the subject of a federal criminal probe.

Bloomberg first reported that the U.S. Department of Justice has opened a criminal investigation into the company. The news comes on top of prior reports of a civil probe by the Securities and Exchange Commission.

Tesla confirmed it had been contacted by the DOJ in a statement to CBS MoneyWatch.

"Last month, following Elon's announcement that he was considering taking the company private, Tesla received a voluntary request for documents from the DOJ and has been cooperative in responding to it. We have not received a subpoena, a request for testimony, or any other formal process. We respect the DOJ's desire to get information about this and believe that the matter should be quickly resolved as they review the information they have received," a company spokesperson said.

According to reports, CEO Elon Musk is under scrutiny for tweeting he planned to take the company private — a plan that appeared ill-conceived and was ultimately abandoned.

According to the Wall Street Journal, the SEC is also looking at whether Tesla misled about production problems with the Model 3. The model — marketed as an "affordable" Tesla electric car with a $35,000 initial price tag — has been plagued by logistical problems, with Tesla delivering just 2,700 cars last year — far less than the 200,000 Musk had earlier promised.

Shares of Tesla, which trade on the Nasdaq exchange under the ticker symbol TSLA, dropped 3.5 percent Tuesday, to around $285. The stock is down nearly 12 percent this year, buffeted by reports of production delays, erratic tweets and reports of Musk's seemingly unstable personal life.

Despite Tuesday's stock dive, some analysts are keeping a positive outlook on the company, betting that the damage could be contained to its CEO.

"Based on the facts we have, we believe Musk will be liable for fines (not necessarily TSLA), although the details are still unclear," wrote Ben Kallo, senior research analyst at Baird, in a client note.

But others reiterated doubts that the company — even if it succeeds in mass-marketing electric cars — could turn a profit on them. UBS recently lowered its price target on the company, calculating that the lowest-priced Model 3 would actually lose money as well as face increased competition from other electric-car makers. 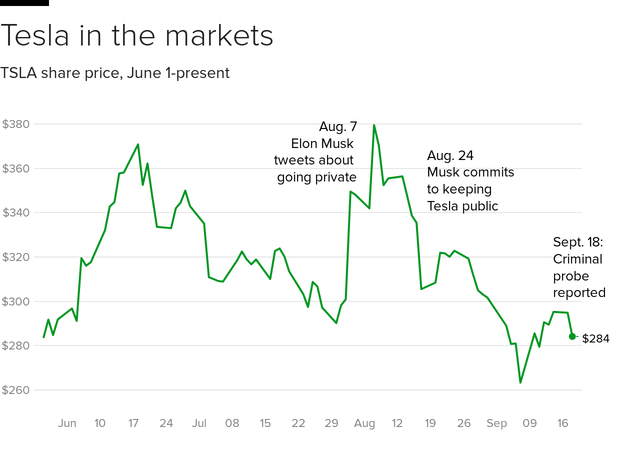 Trump and Biden to face off in person following New York...

Juul to halt sales of flavored e-cigs in retail stores