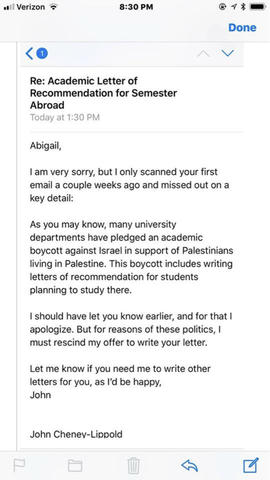 A University of Michigan professor refused to write a recommendation letter for a student to study abroad in Israel, claiming it was part of an "academic boycott" of the country.

John Cheney-Lippold, an associate professor in the American culture department, rejected student Abigail Ingber's request in an email, a screenshot of which was posted to Facebook by Club Z, a networking organization for pro-Israel students. He wrote that he had previously agreed to provide the letter to Ingber, but later realized he had "missed out on a key detail."

"As you may know, many university departments have pledged an academic boycott against Israel in support of the Palestinians living in Palestine," Cheney-Lippold wrote. "This boycott includes writing letters of recommendation for students planning to study there.

"I should have let you know earlier, and for that I apologize," he continued. "But for reasons of these politics, I must rescind my offer to write your letter." He said he'd "be happy" to "write other letters" for Ingber, who is a junior, according to the Michigan Daily student newspaper. Ingber did not immediately return requests for comment from CBS News.

Cheney-Lippold appeared to be referring to the Boycott, Divestment, Sanctions (BDS) campaign, an international protest movement to isolate Israel until it meets demands by Palestinians. Official guidelines from a Palestinian organization associated with the movement say faculty members "should not accept to write recommendations for students hoping to pursue studies in Israel." The guidelines also say academics should not teach or conduct research at Israeli universities, and not participate in academic visits that "receive funding from Israel, its complicit institutions or its international lobby groups."

Many supporters of Israel consider large swaths of the BDS movement to be motivated by anti-Semitism. The Anti-Defamation League has labeled the effort "the most prominent effort to undermine Israel's existence."

The BDS movement has vocal supporters at many colleges across the U.S. The University of Michigan's student government in November 2017 voted for the first time to approve a pro-BDS resolution, which called on the school to divest its holdings in companies doing business with Israel.

But the university's board of regents rejected that resolution, and the school denies that its departments have taken a broader stance against Israel, as Cheney-Lippold claimed.

"Injecting personal politics into a decision regarding support for our students is counter to our values and expectations as an institution. The academic goals of our students are of paramount importance. It is the university's position to take all steps necessary to make sure our students are supported," the school said in a statement to CBS News.

The school did not say if Cheney-Lippold had been reprimanded for his email.

In an email to CBS News, Cheney-Lippold said he made a mistake in his message to the student. He meant to say that many professors, not "many university departments," were part of the Israel boycott.

"While drafting the email, I was in the middle of doing departmental business — and must have had departments on my mind," he wrote. "I didn't notice the error until after it was sent, but I want to emphasize that only individual professors are part of the boycott, not any department at the University of Michigan."

Asked about the uproar over the email, Cheney-Lippold added, "I firmly stand by my decision, as I stand against all injustice and inequality. I hope others stand with me in protesting a government that has created a legal system that favors Jewish citizens' right to self-determination over Palestinians'. I will continue to support Palestinian rights until everyone in Israel is treated equally, including at the university level."

He also said he has "some meetings scheduled with university officials" about the email.

Michigan Gov. Rick Snyder in January 2017 signed a law that bans boycott of individuals or public entities from a foreign state, though it made no direct mention of Israel or the BDS movement. 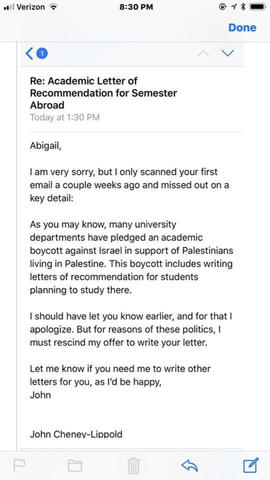