Only two years after taking the helm at Tyson Foods, Tom Hayes is stepping down as president and CEO of the meat producer, with longtime company insider Noel White tapped to replace him.

Hayes will depart at the end of September for "personal reasons," according to the maker of Ball Park hotdogs and Jimmy Dean sausages. The company did not elaborate further.

White, Tyson's group president of beef, pork and international divisions, will succeed Hayes, Tyson's board of directors said in a statement.

Hayes joined Tyson in 2014 with its acquisition of The Hillshire Brand Company, where he was chief supply chain officer. In 2016, Hayes was appointed president and CEO of the Springdale, Arkansas-based company.

Tyson said White has been with the company since 2001, when it acquired beef and pork producer IBP, where White worked since 1983. He previously served as chief operations officer and president of poultry.

In early afternoon trade, shares of Tyson were down nearly 1 percent. 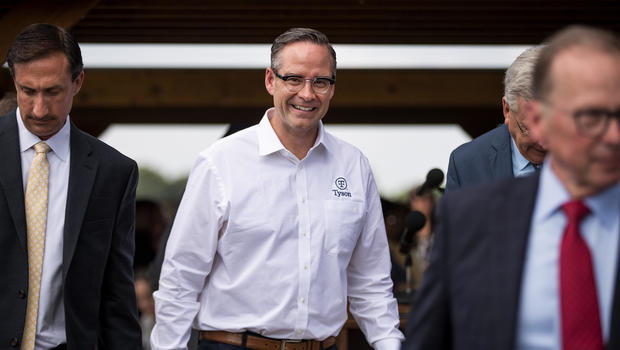