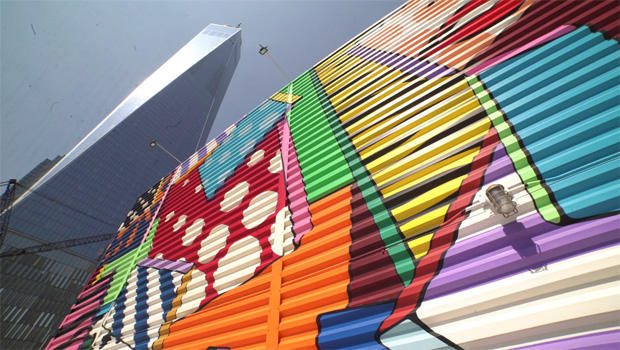 Street artists are leaving their mark on one of New York City's most hallowed sites, as Faith Salie is about to show us:

It's not uncommon to see that people in New York City have left their marks on the side of a building … until you realize where that building is.

"I'm literally living out every graffiti artist's dream," said Dylan Bauvez. "I'm up there painting what I hold closest to myself legally here in the heart of New York City, where New York's heart was broken."

The World Trade Center is undergoing a transformation, by way of street art. Bauvez calls his mural "Wild Things," and dedicates it to his sister and mother who are fighting cancer.

He showed Salie his Twin Towers tattoo. "I was in the fourth grade when it happened. And my mother was supposed to be here that day, but she called in sick and she didn't show up. And then the next time she ever showed up to the World Trade Center grounds was to see my painting on the fence. She got to come see it, and it was an emotional thing."

All across this construction zone – more than 20,000 square feet of corrugated metal – every surface tells a story of mystery, acceptance, and love.

One, painted by artists Chinon Maria and Sebastian Mitre, blooms audaciously in the shadow of the 9/11 Memorial. Its flowers suggest new life and hope. "You want to do something that honors the area, that brings hope, that brings life to a place that has gone through such tragedy," said Maria.

"That is a key word: rebirth," added Mitre.

Reviving this site, one can of spray paint at a time, even from 30 feet in the air.

For developer Larry Silverstein, the images that bathe his buildings illustrate just how far he's come … and how much further he has to go. The graffiti, he told Salie, "brings life, it brings zest, it brings activity, it brings a feeling of togetherness: Hey, we're part of something that's wonderful."

The art project started when earlier this year the Port Authority of New York and New Jersey asked Silverstein to liven up his construction zone.

"You could have hired anyone – why did you choose street art?" Salie asked.

"Maybe because it was the coolest kind of art we could find!" Silverstein laughed. "And I'm saying this to you as an 87-year-old guy!"

"Decades ago, businesses would never want someone spray painting their construction sites, right? That would be vandalism. And you're going out and buying the spray paint cans for these artists?"

"The things that we previously were scared about, we now embrace for its beauty," said Alejandro Velasco, who teaches an "Art and Politics in the City" course at New York University's Gallatin School. "The question is, how can we preserve the aesthetics without using some of its politics? That's the real challenge of street art in the 21st century."

Velasco says graffiti emerged in New York City in the 1960s as a way for impoverished groups to find visibility, to literally make their mark in society.

Turns out, graffiti goes way back. Velasco says that when Spanish conquistador Hernán Cortés was plundering the Americas in the 1500s, graffiti offered expression to his otherwise silenced soldiers.

"They would paint messages on the walls of his palace," Velasco said. "And he would write back on the wall. So, this became a site where they would exchange opinions."

And closer to our own time, remember those pictures of New York in the 1960s, when impoverished artists quite literally used almost anything to make their mark?

"It's fascinating to realize that graffiti is sort of like an early version of social media: Hear me. I get to have a voice," said Salie.

And it's social media, say artists Stickymonger, Boogie, and Todd Gray, that's helping spread the popularity of this public palette. "The pictures that they take with it, they jump with it. The action, the motions that they give. It's everybody's artwork. We all made it together," Boogie said.

Still, for all the joy their art brings, the artists say they haven't forgotten their canvas is hallowed ground.

For all the joy this art brings to its audience, the artists will never forget the history of their canvas.

"To have all these murals, to me they're just these metaphors of wildflowers, just kind of growing through the rubble," said Gray.

Chinon Maria got emotional saying, "You think about the location and how it is our job to really focus in and create something to respect all the lives that were lost, and to know that there is hope and there is a way for us to all unite together, and that is through the arts." 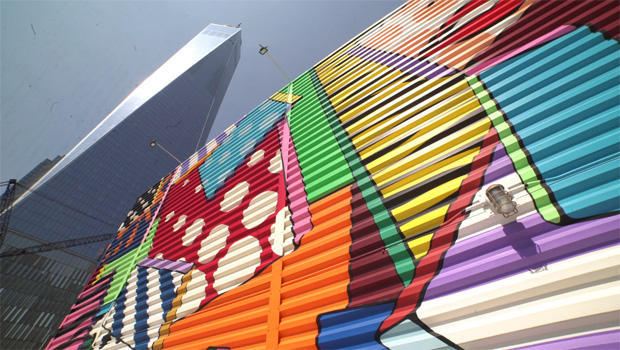 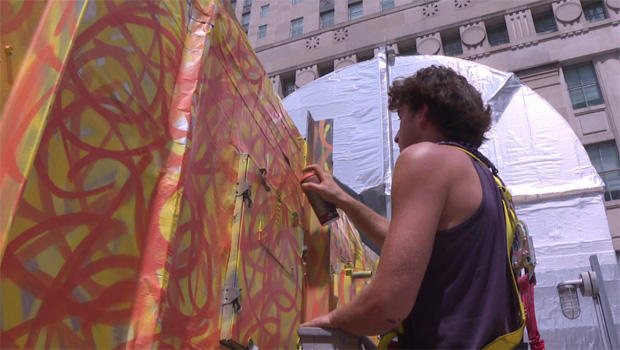 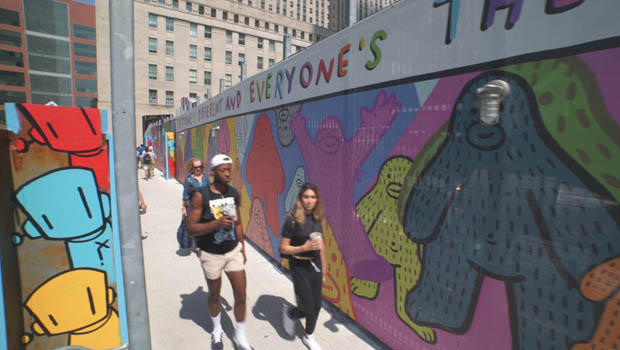 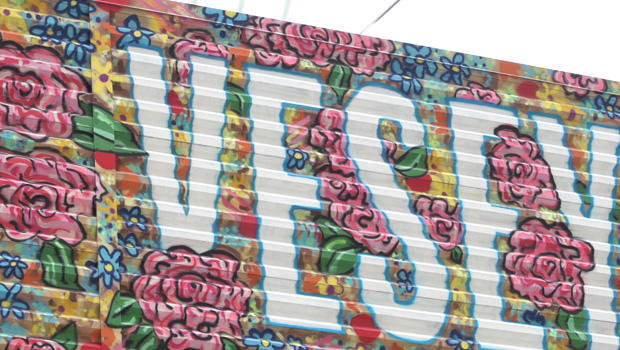 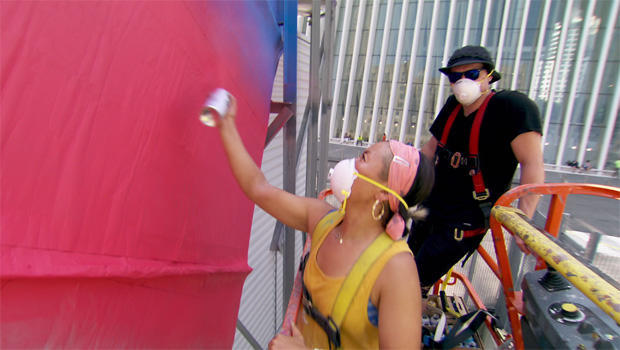 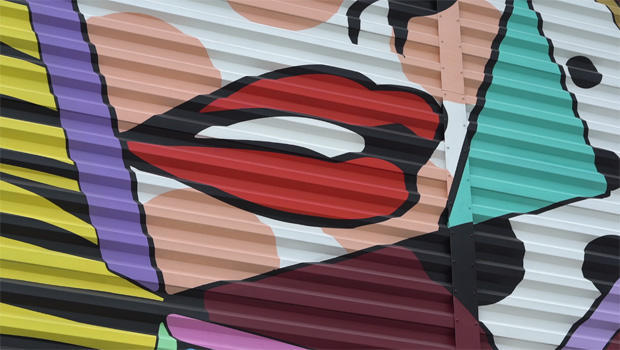 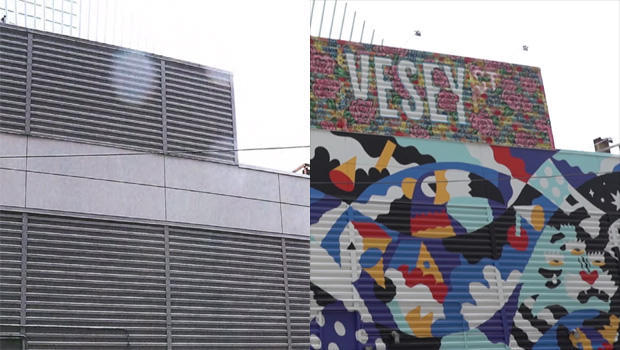 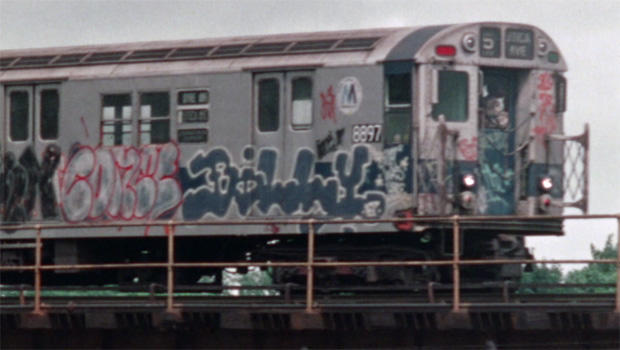 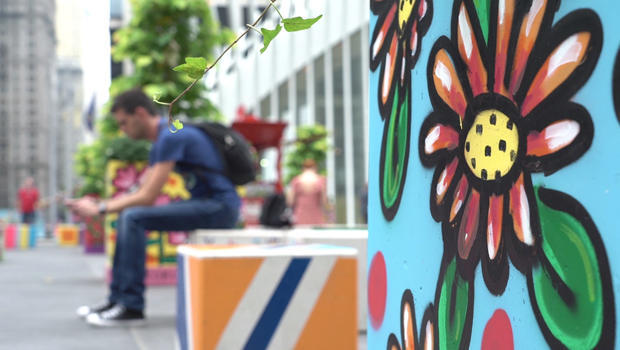