By Alain Sherter MoneyWatch September 15, 2018, 7:30 AM Lehman Brothers is long gone, but the economic rot lingers

With years to reflect back on that epic economic collapse, the seeds of doom were apparent: The rich growing richer, their wealth multiplied by generous income and corporate tax cuts; the remaining 99 percent of Americans struggling to keep pace; soaring personal debt; a period of speculative frenzy; a powerful financial industry with a hotline to Washington.

Yes, 1929 was a hellacious year. That many of the same ingredients that led to the Great Depression were also present before the U.S. housing crash a decade ago is no coincidence. It is history repeating itself.

Even in the Roaring '20s, we'd been there before. In the 19th century, a sharp increase in inequality after the Civil War also contributed to the the "Panic of 1873," which would trigger a six-year depression in the U.S. and Europe (the American bank Jay Cooke & Co., founded by the railroad baron, was the Lehman Brothers of its time.)

The lesson is clear: Deepening income inequality today should give pause in pondering where things may go tomorrow. Because while the U.S. economy has rebounded since the housing crash, in one way it remains deeply vulnerable — the gap between the rich and everyone else in the U.S. today is roughly where it was in 1928. Just a few of the warning signs:

The path to peril

How does inequality lead to crisis? Most fundamentally, as Nobel Laureate economist Joseph Stiglitz explains, by allowing the rich to save more of their money than do the poor and the middle class. Over time, that upward redistribution of wealth erodes Americans' ability to spend and invest. Demand shrivels, a pox in a consumer-driven economy like the U.S.

That trend had already been at work for years when housing prices started to soar out of all proportion in the late 1990s. Rampant financial deregulation at the end of that decade, coupled with a Federal Reserve constitutionally hooked on cheap money, unleashed a tide of reckless and predatory lending. Borrowers loaded up on debt they could never repay, while homeowners turned their homes into ATMs in the delusion they would dispense cash forever.

The illusion lasted until the real estate bubble popped — $8 trillion in housing wealth was vaporized. We've been trying to emerge from the crater ever since.

Growing inequality isn't a uniquely American problem. Research shows that gaps in income and wealth are also widening in China, India and even in Europe, where taxation is generally more progressive.

But a host of factors are making things worse in the U.S., whether that's tax cuts skewed to top earners or unequal access to the usual pathways to upward mobility, like education and health care.

A blind eye to disaster

Economists point to other parallels between the surging inequality that preceded the Great Depression and what prevailed before the housing bust that caused the Great Recession. Most notably, millions of Americans piled into risky investments – stocks, in the earlier meltdown, houses in the latter. Financial bubbles expanded. "Laissez faire" government policies had let bankers run wild.

And crucially, key actors in both dramas – Wall Street CEOs, financial regulators, central bankers and homeowners themselves – had incentives to avert their eyes from the gathering storm. Most culpable in 2008: "Too big to fail" banks such as Bank of America, Citigroup and of course Lehman, along with large subprime lenders like Countrywide, that made billions by issuing dodgy loans and packaging them into securities for eager investors.

As the bad paper piled up, the country's supposed government financial watchdogs dozed, either "captured" because of their close ties to the very institutions they were charged with policing, or just disastrously wrong. In a speech that has become a hallmark of such misjudgments, former Fed chief Ben Bernanke as late as May 2007 predicted that the problems already festering in the subprime loan sector at the time would have a "limited" impact on the broader housing market and on the financial system at large.

Sixteen months later, Lehman declared bankruptcy. The failure was by no means Bernanke's alone — many regulators, economists, bankers, stock analysts and other "experts" saw their carefully constructed models go up in flames. The cardinal sin: A dogmatic adherence to ideas that didn't downplay the risks slowly building in the economy so much as dismiss them as impossible.

Beyond simply perceiving the link between inequality and financial instability, it's crucial to better understand how changes in patterns of wealth and income in the U.S. can expose the economy to risk.

For example, the roots of the meltdown were in the housing market, the bedrock of most Americans' wealth. By contrast, the wealth of those higher up the income ladder was, and remains, mostly in stocks. It is this group, not the increasingly squeezed middle class, that has been the main beneficiary of the record bull market that followed the end of the recession.

In short, shifts in wealth and income can strengthen the U.S. — or introduce dangerous fault lines. We ignore those cracks in the facade at our peril.

No surprise, then, that tepid gains in wealth for most Americans, coupled with surging wealth for those at the top, are now driving inequality in ways visible across the economic — and political — landscape.

Inequality wasn't the sole catalyst for the collapse; many factors came into play. But it was fertile soil for crisis. As usual, we'd be wise to learn from history. 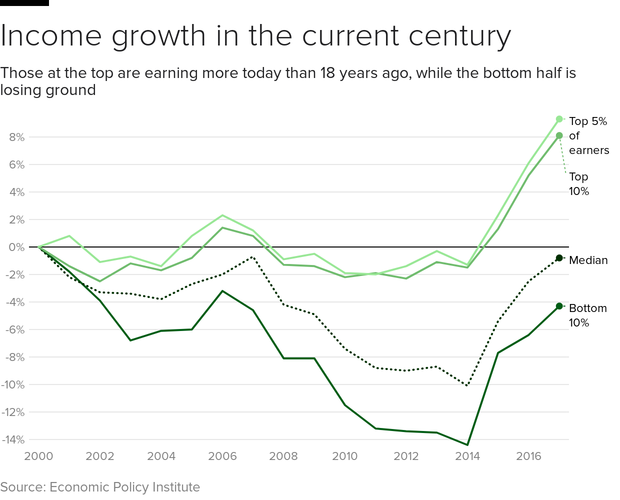 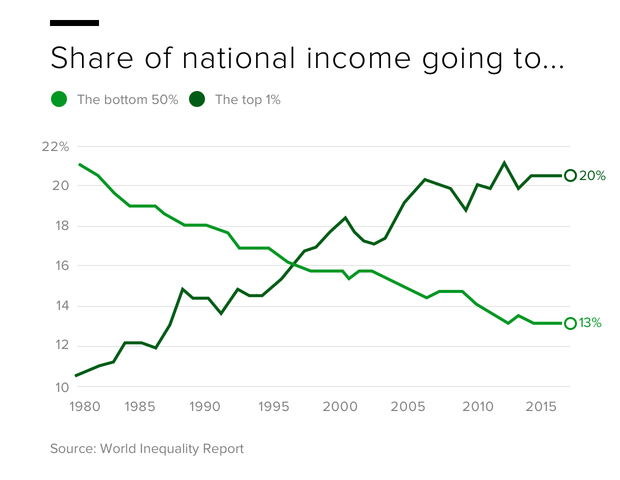