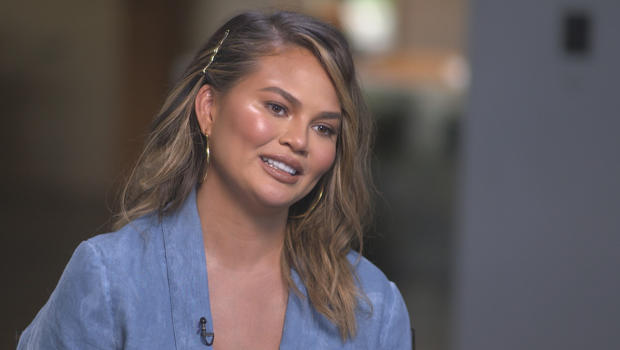 Rita Braver talks with a model-turned-celebrity who is also the muse of her multiple-award-winning musician-husband:

Chrissy Teigen's stunning beauty is undeniable in this video of the number one song her husband, John Legend, wrote for her, "All of Me":

But listen carefully to the opening line of this "love" song: "What would I do without your smart mouth."

Because it's that smart mouth that is the real key to Chrissy Teigen. "I wear my heart on my sleeve," she said. "I'm very emotional, I'm very vocal, I'm very spur-of-the-moment."

Her uninhibited style has earned her a regular gig on the cable show "Lip Sync Battle." But many people know the 32-year old Teigen best as a social media star, with 10.6 million followers on Twitter and 19.9 million on Instagram.

"I know, and it frustrates me; I feel like I deserve more on Twitter," she laughed. "John has a ton on Twitter [12.2 million followers, to be exact], and he's kind of boring."

In fact, the internet is inundated with lists of Teigen's top posts – funny lines like, "Do you ever feel like your dog is disappointed in you?" and lots of racier stuff, like pictured of her stretch marks, and her husbands posterior. "Yeah, I forgot about that. It was a good one," she laughed.

And of course, Teigen was posting earlier this week when Legend became the first African-American man to have achieved EGOT status – winning an Emmy to go with his Grammy, Oscar and Tony. She even showed him placing the statue at home.

Teigen's mom is Thai; her dad is of Norwegian descent. Teigen was just a teenager when a photographer spotted her working in a Southern California surf shop:

"This guy, he thinks I'm beautiful, he wants to take pictures. He seems really nice," she recalled. "And my dad's like, 'No. That's so creepy, that's so weird that he would go into your work.' And then I remember just thinking it was such a big deal that I shoot with this person for some reason."

The up shot? "My dad was like, 'Okay, I'll go.' And my dad was on the beach, holding the light reflector."

Soon her modeling career was launched, compete with frequent appearances in Sports Illustrated.

But it was in 2007, when she was 21, that she was cast in a music video for an up-and-coming young singer-songwriter.

Watch John Legend and Chrissy Teigen in the music video for "Stereo":

It was proof that opposites DO attract. "I'm a little more buttoned-up and a little more mellow," Legend told Braver. "She's obviously got all this energy, and she's so dynamic. But she's also so creative and spontaneous. It just works well together."

They now have two children: Luna, 2 and Miles, almost 4 months. Like everything else, Teigen was open about both her fertility struggles and her postpartum depression after her first child was born.

"I think people on social media are my friends, and I think they deserved to know," she said. "I don't know, is that so weird? That's kind of weird!" she laughed.

She says she got through it with lots of support from Legend, and by taking anti-depressants. But Braver was taken aback when Teigen said she believes she avoided postpartum depression after her second child because she ate the placenta.

"I don't think I can have you eating your placenta on prime time!" Braver said.

"Really? That's not a normal thing? I'm in L.A., it's very normal. They grill it here! You can try some of mine after!"

She was just kidding.

Which brings us, all joking aside, to Teigen's other major passion: food. Placenta ribs, anyone?

Actually, she prepared for Braver Soy-Garlic Fried Ribs. She's the author of a best-selling cookbook ("Cravings"), and is about to publish a sequel ("Cravings: Hungry for More").

And, if you're wondering how Chrissy Teigen squares her modeling career and her love of food:

"I really prefer being happy and getting to eat things that I love, still wanting to be healthy. But I just don't care about looking good in a swimsuit anymore. I guess that's the only way to put it."

However you put it, it's hard to resist her cooking, in most cases anyway.

"I'll eat anything as long as it's cooked for me," said Braver. 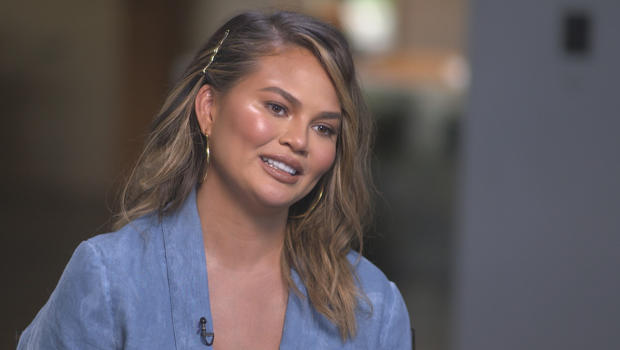 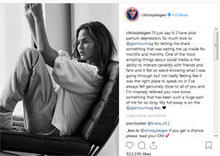 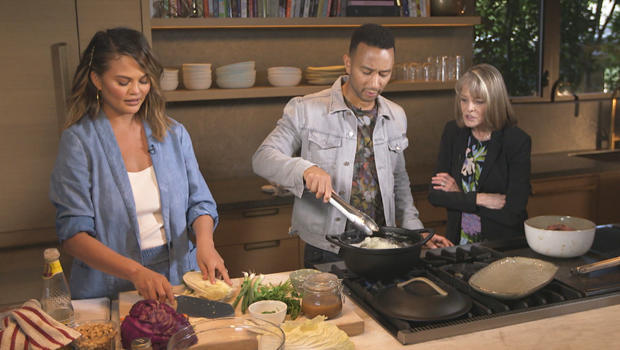