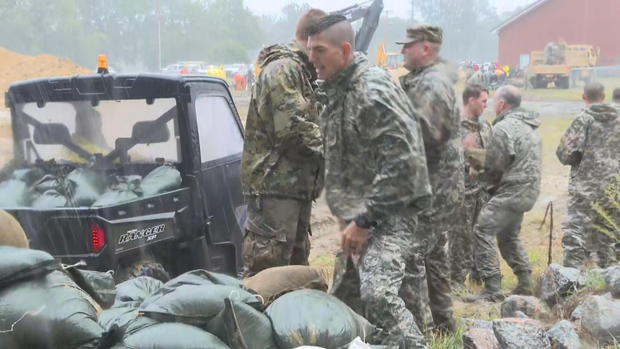 By DeMarco Morgan CBS News September 14, 2018, 7:06 PM "We are trying to get ahead of it": Residents hit by Hurricane Matthew protect against Florence

LUMBERTON, N.C. — As Florence continued to pound the Tar Heel state with high winds and heavy rain on Friday evening, volunteers and National Guardsmen were outside the West Lumberton Baptist Church. Volunteers, many of them residents, got the call for help earlier Friday morning and showed up in big numbers.

But they were in a race against time because they needed to get sandbags to the most critical area.

Two years ago, Hurricane Matthew dumped 20 inches of rain on Lumberton. According to city officials, the town's protective levee never breached during that storm. But where the railroad passes through, the levee drops down for tracks and that's where they say the flood waters from Matthew rushed in.

Florence is expected to drop even more rain than Matthew did.

"We are trying to plug the hole in the levee," said Corey Walters, deputy director of public works for Lumberton.

"We basically got a lot of work to do," Walters said. "No time to do it and really not a whole lot of time to think about what we are doing and how the best way to do it is."

CSX Transportation, the railroad, issued a statement saying they are providing "safe access" to the community to "minimize flooding." The Lumber River is projected to hit flood stage sometime Saturday and crest at nearly 25 feet. 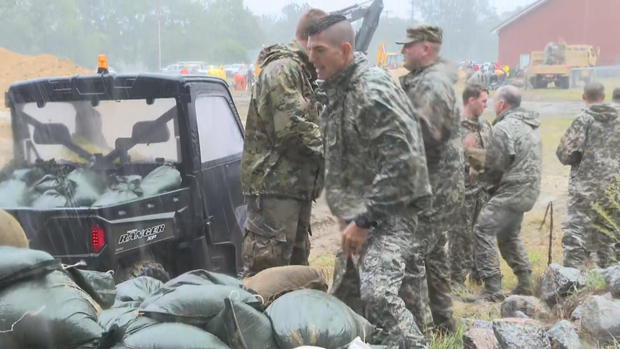