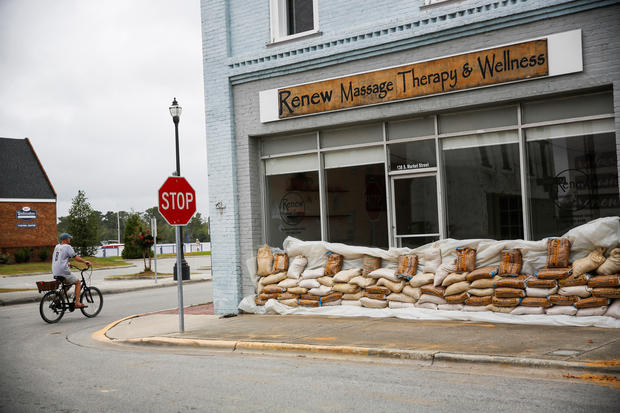 CBS/AP September 13, 2018, 4:55 PM "This is a powerful storm that can kill": Hurricane Florence's onslaught begins

WILMINGTON, N.C. — The leading edge of Hurricane Florence has arrived in North Carolina, with tropical storm-force winds carrying drenching bands of rainfall onto some beach communities, meteorologists said Thursday. The monster storm was moving in for a prolonged and potentially catastrophic stay along the Southeast coast that could drench the homes of as many as 10 million people.

But forecasters warned that the widening storm — and its likelihood of lingering around the coast day after day after day — will bring surging ocean water and torrential rain.

North Carolina Gov. Roy Cooper said he knows many people are watching the changing storm predictions and categories, and he's concerned because some are even saying that "North Carolina is getting a break."

"Please hear my message," he said. "We cannot underestimate this storm."

"Don't relax; don't get complacent. Stay on guard. This is a powerful storm that can kill," he said.

The hurricane center said in its 5 p.m. advisory Thursday that Florence is centered about 100 miles east-southeast of Wilmington, North Carolina, and about 155 miles east of Myrtle Beach, South Carolina, moving northwest at 5 mph with maximum sustained winds of 100 mph. Hurricane-force winds are blowing 80 miles from its center, and tropical-storm-force winds reached up to 195 miles from the eye.

Hurricane-force winds are moving closer to North Carolina's Outer Banks and the southeastern part of the state, the NHC said. Florence's center will approach the coasts of North and South Carolina later Thursday. It will move near — or over — the coast of southern North Carolina and northeastern South Carolina in the hurricane warning area on Friday.

"A slow motion across portions of eastern and central South Carolina is forecast Friday night through Saturday night," the center said.

Forecasters warned that Florence is deadly because of its size and slow forward speed.

"It truly is really about the whole size of this storm," National Hurricane Center Director Ken Graham said. "The larger and the slower the storm is, the greater the threat and the impact — and we have that."

The NHC said life-threatening storm surge and rainfall are expected. The storm is expected to push up to 13 feet of storm surge and dump water on both North and South Carolina. The forecast calls for as much as 40 inches of rain over seven days along the coast, with the deluge continuing even as the center of the storm slogs away over the Appalachian Mountains.

The result could be what the Houston area saw during Hurricane Harvey just over a year ago: catastrophic inland flooding that could swamp homes, businesses, farms and industrial sites.

Tornadoes also remain a threat. The NHC said it is possible "a few tornadoes" will hit eastern North Carolina through Friday.

FEMA urged people to have multiple ways to receive local weather alerts — through a weather radio, phone and TV. It also warned against the spread of false information and said it created a "rumor control page" for Florence that will be regularly updated.

The NHC said in its 5 p.m. advisory that the following watches and warnings are in effect:

"A Storm Surge Warning is in effect for…

A Storm Surge Watch is in effect for…

A Hurricane Warning is in effect for…

A Hurricane Watch is in effect for…

A Tropical Storm Warning is in effect for…

More than 1.7 million people in North and South Carolina and Virginia were warned to clear out. In South Carolina alone, more than 421,000 people have evacuated, the state's governor, Henry McMaster, said Thursday afternoon.

At a news conference just before 3 p.m. ET, he urged those in evacuation zones to leave now "because time is running out, and remember this: once these winds start blowing at that tropical-storm rate, it will be virtually impossible for the rescuers to get in to rescue you."

"So if you have not left, if you are in a place of danger, if you are in these zones, now is the time to go because that window of opportunity is closing on you very quickly," he said.

An emergency management official in one of the most populated areas of coastal North Carolina said Thursday afternoon that winds from the storm have arrived and other impacts won't be far behind. New Hanover County Emergency Management Director Steven Still said residents who didn't evacuate should expect 60 mph winds by 7 p.m. that would eventually increase to 100 mph or more. He said residents "can expect to have that wind to the tune of 100 mph-plus stay on us for considerable period of time."

He said landfall is expected around 8 a.m. Friday in the Wrightsville Beach area, and that the area could see 20 to 30 inches of rain and beaches could get 9 to 10 to feet of storm surge.

President Trump took to Twitter again Thursday to warn about Florence, urging people to be careful and saying "we are completely ready" for the storm. On Wednesday, he said, "Don't play games with it. It's a big one."

Power outages along the coast

Power outages were creeping up along the North Carolina coast Thursday as tropical storm-force winds started sweeping over land. Electric utilities and cooperatives reported about 12,000 outages statewide as of early Thursday afternoon, with nearly all of them at the coast.

Most of the homes and businesses without electricity are in Carteret and Craven counties. Both are north of the eye's projected path and expected to get massive amounts of rain — potentially 20 inches or more.

Airlines canceled about 1,200 flights and counting. As of Thursday afternoon, total cancellations within, into or out of the U.S. was 603 for the day, while 650 flights were cancelled for Friday, according to flight-tracking service FlightAware.

CBS News correspondent David Begnaud reported this week that people living in the barrier island community of Wrightsville Beach, North Carolina, were bracing for a possible direct impact. Long lines formed at service stations, and some started running out of gas as far west as Raleigh, with bright yellow bags, signs or rags placed over the pumps to show they were out of order. Some store shelves were picked clean.

South Carolina said it is planning to end the reversal of some interstate lanes that were switched to help move people away from the state's coast. Department of Public Safety Director Leroy Smith told reporters that, starting Thursday at 6 p.m., officers will close Interstate 26 lanes that had been switched from eastbound to westbound to move people away from the Charleston area toward the center of the state.

West Virginia agencies are mobilizing to respond to problems arising from the storm. The governor's office said in a new release the Division of Homeland Security and Emergency Management activated its emergency operations center Wednesday. The statement said 50 National Guard members are prepared to assist in locations across the state.

The NWS forecast said up to 4 inches of rain is possible in parts of the state through next week.

NHC announced Wednesday night they are now monitoring a fourth storm that is far out in the Atlantic. That storm is Subtropical Storm Joyce. 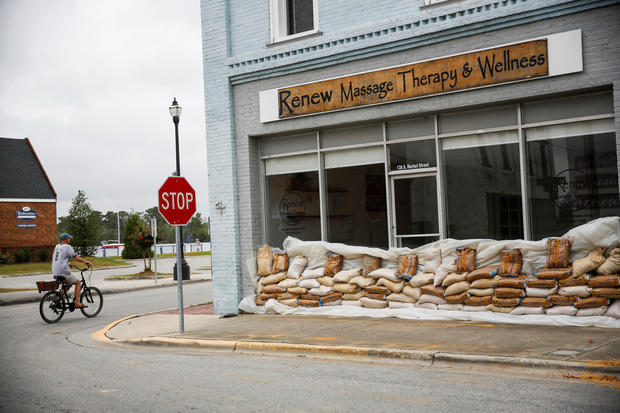 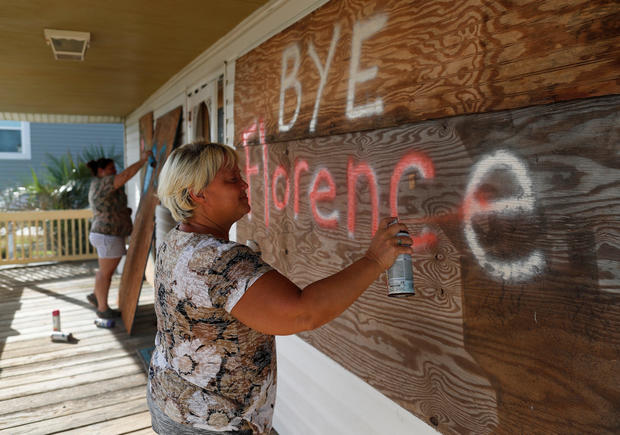 At least half a million without power in Florida as Hurricane...

How to keep your pets safe during Hurricane Ian