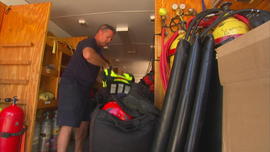 By Elaine Quijano CBS News September 12, 2018, 7:37 PM First responders from across the U.S. flock to North Carolina ahead of Florence

RALEIGH, N.C. — The North Carolina coast is largely empty, as many people have fled in advance of Hurricane Florence. Farther inland, Raleigh is a hub of activity.

After 20 hours and two flat tires, Capt. Mike Jamieson and his fellow firefighters from South Bend, Indiana, rolled in just after midnight.

"Took a two hour nap because we just weren't going to make it and we didn't want to come in here dragging," Jamieson said.

Similar to the scene after Hurricane Harvey, volunteers have come to the rescue. Mike Cannon from Vermont said hazards will be everywhere.

"There's always something underneath the surface of the water that will potentially damage it. So we'd like to be able to stay operational," Cannon said.

The calls went out to personnel last week and already you can see crews from Vermont, Indiana and Florida. All in all, officials are expecting 1,000 rescue personnel to arrive in Raleigh.

Also en route are 82 members of New York Task Force 1, who were on the road to rescue others as their city marked the anniversary of the 9/11 attacks. Now comes the part that can sometimes be the hardest — waiting for the unknown. 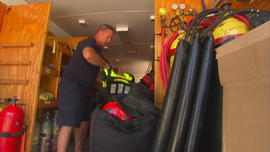