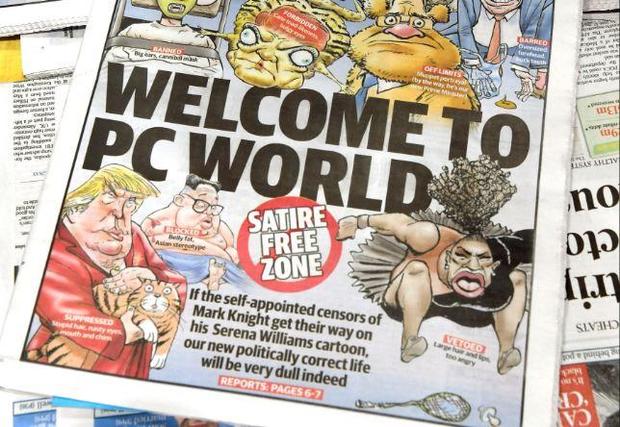 MELBOURNE, Australia — A controversial cartoon of Serena Williams that has been widely condemned as a racist depiction of the tennis great has been partially reprinted on the front page of the Melbourne-based newspaper that initially published it. The Herald Sun newspaper printed an edited portion of the cartoon — featuring 23-time Grand Slam winner Williams jumping on a broken racket during her dispute with a chair umpire in the U.S. Open final — among caricatures of other famous people Wednesday under the headline "Welcome to the PC World."

The newspaper has defended its cartoonist Mark Knight's depiction of Williams and is asserting the condemnation, which has come from all parts of the world, is driven by political correctness.

"If the self-appointed censors of Mark Knight get their way on his Serena Williams cartoon, our new politically correct life will be very dull indeed," the paper printed on its front page.

Williams has won the Australian Open singles title seven times at Melbourne Park, including 2017 when she was pregnant. She is a crowd favorite at the first tennis major of the year, which is held each January at a venue that is within sight of the Herald Sun's headquarters.

In comments published by News Corp., Knight said that he created the cartoon after watching Williams' "tantrum" during her U.S. Open final loss to Naomi Osaka on Saturday and that it was designed to illustrate "her poor behavior on the day, not about race."

During the final against Osaka, Williams got a warning from the chair umpire for violating a rarely enforced rule against receiving coaching from the sidelines. An indignant Williams emphatically defended herself, denying she had cheated. A short time later, she smashed her racket in frustration and was docked a point. She protested and demanded an apology from the umpire, who penalized her a game.

Critics of Knight's cartoon described it as a clear example of a stereotype facing black women, depicting Williams as an irate, hulking, big-mouthed black woman jumping up and down on a broken racket. The umpire was shown telling a blond, slender woman — meant to be Osaka, who is Japanese and Haitian — "Can you just let her win?"

"I was deeply offended. This is not a joke," said Vanessa K. De Luca, former editor in chief of Essence magazine, who wrote a column about the U.S. Open furor.

The cartoonist "completely missed the point of why she was upset," De Luca told The Associated Press. "It was about her integrity, and anybody who doesn't get that is perpetuating the erasure that so many black women feel when they are trying to speak up for themselves. It's like our opinions don't matter."

In a social media post, Peter Blunden, managing director of News Corp's operations in the state of Victoria, said: "Australia's finest cartoonist Mark Knight has the strongest support of his colleagues for his depiction of Serena Williams' petulance. It's about bad behavior, certainly not race. The PC brigade are way off the mark … again." 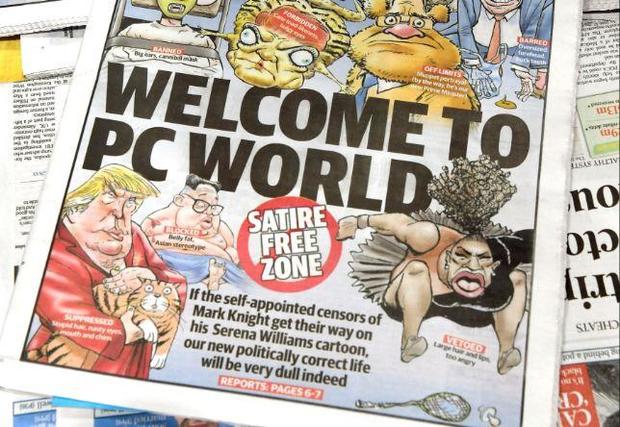