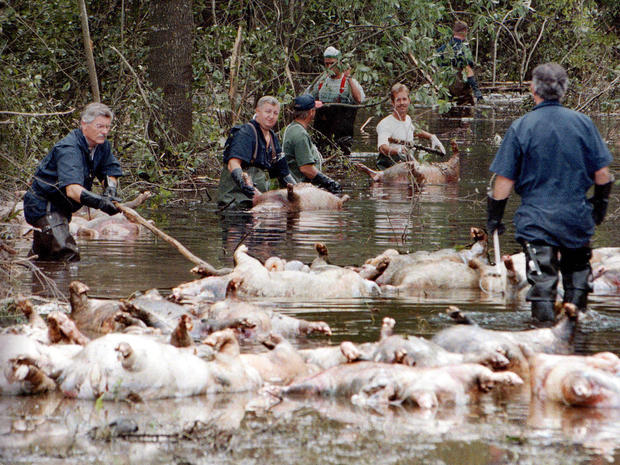 Hurricane Florence's heavy rains could cause an environmental disaster in North Carolina, where waste from hog manure pits, coal ash dumps and other industrial sites could wash into homes and threaten drinking water supplies. Computer models predict more than 3 feet of rain in the eastern part of the state, a fertile low-lying plain veined by brackish rivers with a propensity for escaping their banks.

Some of the 200,000 people along the North Carolina coast are making their way inland Wednesday as authorities are ordering people in the Outer Banks to pack up and get out as Florence nears, CBS News correspondent Mark Strassmann reports.

Longtime locals don't have to strain their imaginations to foresee what rain like that can do. It's happened before.

In September 1999, Hurricane Floyd came ashore near Cape Fear as a Category 2 storm that dumped about 2 feet of water on a region already soaked days earlier by Hurricane Dennis. The result was the worst natural disaster in state history, a flood that killed dozens of people and left whole towns underwater, their residents stranded on rooftops.

The bloated carcasses of hundreds of thousands of hogs, chickens and other drowned livestock bobbed in a nose-stinging soup of fecal matter, pesticides, fertilizer and gasoline so toxic that fish flopped helplessly on the surface to escape it. Rescue workers smeared Vick's Vapo-Rub under their noses to try to numb their senses against the stench.

Florence is forecast to make landfall in the same region as a much stronger storm.

"This one is pretty scary," said Jamie Kruse, director of the Center for Natural Hazards Research at East Carolina University. "The environmental impacts will be from concentrated animal feeding operations and coal ash pits. Until the system gets flushed out, there's going to be a lot of junk in the water."

North Carolina has roughly 2,100 industrial-scale pork farms containing more than 9 million hogs – typically housed in long metal sheds with grated floors designed to allow the animals' urine and feces to fall through and flow into nearby open-air pits containing millions of gallons of untreated sewage.

During Floyd, dozens of these lagoons either breached or were overtopped by floodwaters, spilling the contents. State taxpayers ended up buying out and closing 43 farms located in floodplains.

To prepare for Florence, the North Carolina Pork Council says its members have pumped down lagoon levels to absorb at least 2 feet of rain. Low-lying farms have been moving their hogs to higher ground.

"Our farmers and others in the pork industry are working together to take precautions that will protect our farms, our animals and our environment," said Brandon Warren, the pork council's president and a hog farmer. "The preparations for a hurricane began long before the past few hours or days. Our farmers take hurricane threats extremely seriously."

The Environmental Protection Agency said Tuesday that it would be monitoring nine toxic waste cleanup sites near the Carolinas coast for potential flooding. More than a dozen such Superfund sites in and around Houston flooded last year in the aftermath of Hurricane Harvey, with spills of potentially hazardous materials reported at two.

Since power plants need vast amounts of water to generate steam, their unlined waste pits are located along lakes and rivers. Some of the pits were inundated during past storms, including during Floyd and Hurricane Matthew in 2016.

After a 2014 spill at a Duke plant coated 70 miles of the Dan River in toxic gray sludge, state regulators forced the Charlotte-based company to begin phasing out its coal ash pits by 2029. Because that work was already underway, wastewater levels inside the ash ponds have been falling, Duke Energy spokesman Bill Norton said Tuesday.

"We're more prepared than ever," said Norton, adding that crews will be monitoring water levels at the pits throughout the storm.

The company is also preparing for potential shutdown of nuclear reactors at least two hours before the arrival of hurricane-force winds. Duke operates 11 reactors at six sites in the Carolinas, including the Brunswick Nuclear Plant located south of Wilmington near the mouth of the Cape Fear River.

The Brunswick plant's two reactors are of the same design as those in Fukushima, Japan, that exploded and leaked radiation following a 2011 earthquake and tsunami. Following that disaster, federal regulators required all U.S. nuclear plants to perform upgrades to better withstand earthquakes and flooding.

Duke Energy did not respond to requests for information about specific changes made at Brunswick, other than to say emergency generators and pumps will remove stormwater at the plant if it floods. The company issued assurances this week that it is ready for Florence, which is predicted to pack winds of up to 140 miles per hour and a 13-foot storm surge. 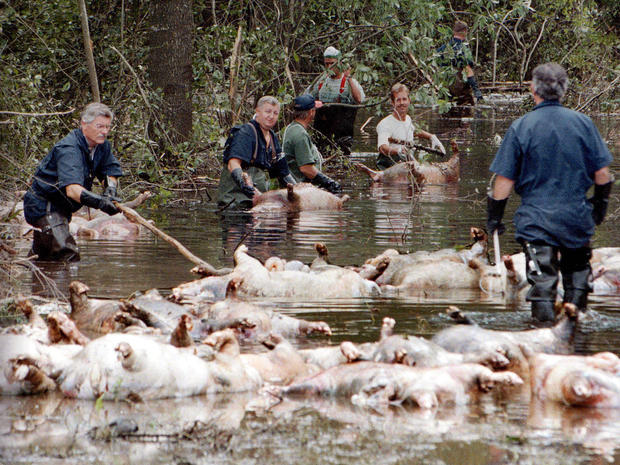 Boy with autism dies after being restrained at school