WASHINGTON — U.S. health officials say teenage use of e-cigarette has reached "epidemic" levels and are calling on the industry to address the problem or risk having their flavored products pulled off the market.

The warning from the Food and Drug Administration on Wednesday marks a stark shift in the agency's tone on e-cigarettes, which have become the most used tobacco product among teenagers.

Since 2017, FDA officials have discussed e-cigarettes as a potential tool to ween adult smokers off cigarettes.

But FDA commissioner Scott Gottlieb says the agency did not predict an "epidemic of addiction" among youth, mainly driven by flavored products.

"E-cigs have become an almost ubiquitous ‒- and dangerous -‒ trend among teens," Gottlieb said in a statement. "The disturbing and accelerating trajectory of use we're seeing in youth, and the resulting path to addiction, must end. It's simply not tolerable. I'll be clear. The FDA won't tolerate a whole generation of young people becoming addicted to nicotine as a tradeoff for enabling adults to have unfettered access to these same products."

As part of its plan of action to address the epidemic, the agency sent more than 1,100 warning letters to stores for the illegal sale of e-cigarettes to minors and issued another 131 civil money penalties to stores that continued to violate the restrictions on sales to minors.

Additionally, Gottlieb says the five largest e-cigarette manufacturers will have 60 days to produce plans to immediately reverse underage use of their products.

"The continued increase in youth reporting feeling 'hooked' on vaping devices is concerning," he told CBS News. "As health professionals, we strongly believe that access to nicotine products, and that advertising of nicotine products that appeals to teens, should be restricted to minimize youth exposure."

He also notes that while many adults who use e-cigarettes report that these products helped them stop smoking combustible tobacco, "the benefits of vaping devices for cessation has not yet been borne out at the population level in clinical or observational studies."

"While vaping devices have the potential to be disruptive to the combustible tobacco market, this cannot be at the expense of increasing rates of nicotine addiction in young people," Ylioja said. 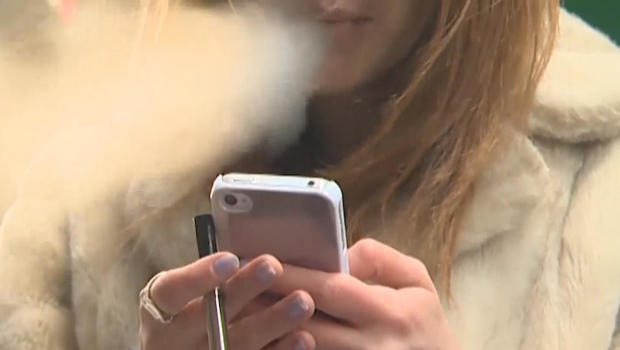 Beyond tariffs, China has other ways to retaliate