America may be enjoying its strongest economy in over a decade, but workers are struggling with a fundamental question: What does it take to get a decent raise?

"One thing that's clear is there's a gap in wage growth that is widening between people who are staying put in their jobs and people who are switching," Andrew Chamberlain, chief economist at the job site Glassdoor, told CBS MoneyWatch recently.

The Federal Reserve Bank of Atlanta tracks wage growth of workers who stay in their jobs and those who leave. The difference between the two groups reached a two-decade high earlier this year. Job switchers' wages grew at 4.4 percent this spring, nearly double the rate of those who stayed.

The gap has narrowed of late, but Americans who leave for new jobs are still enjoying wage growth about 1 percentage point higher than those who stay.

Yet the figures also illustrate how pay is still lagging compared with previous periods of brisk job growth, the Associated Press reported. Even the pay gains for job-switchers are modest compared with periods in the past. Before the Great Recession, job switchers received annual raises of nearly 5 percent. In the late 1990s, they topped 6 percent. Even adjusting for inflation, job switchers fared better in the late 1990s than they do now.

Economists have been unable to explain the modest pay raises for people who have stayed in the same job for the past year. Many had predicted that companies would have to pay more to retain employees at a time when workers are harder to find and the unemployment rate, at 3.9 percent, is near a 50-year low.

Nationally, average hourly pay rose 2.9 percent in August from a year earlier, before adjusting for inflation. That's modest by historical standards. The last time unemployment was this low, in the late 1990s, pay raises for Americans as a whole averaged roughly 4 percent. And when you factor in inflation, average hourly pay has been flat for the past 12 months.

With midterm elections looming, the Trump administration is redefining the definition of pay. In a report released Wednesday, the administration's top economist, Kevin Hassett, asserted that pay is rising when accounting for benefits like health care and the impact of tax cuts, and if you use an alternative gauge of inflation.

But even by the White House's own measure, wage increases have slowed over the past three years, the Associated Press reported.

It would seem fundamental: If you want a decent raise, find a new job. But it doesn't always work that way. The Great Recession, with its double-digit unemployment, made many people reluctant to job-hop. A measure of job mobility, known as the quit rate, is below the level it saw in previous economic expansions, although it has been rising in recent months.

"To me that says, even though we're getting people into jobs, they're just sort of staying where they're at. People aren't saying, 'If I can get a better job with another employer, I'll jump ship,'" said Cathy Barrera, chief economist at the job site ZipRecruiter.

"That kind of reticence can be reflected in issues like mobility and employers being willing to raise wages," she added.

According to Martha Gimbel, an economist at job site Indeed, one reason for the low job-switching rate is the growing use of "noncompete" agreements, which restrict workers from jumping to competitors.

Such agreements have been used increasingly even in low-wage jobs such as fast-food work. More than half of major franchises had so-called no-poach clauses in their contracts, which prevent individual restaurants in a franchise from hiring each other's employees, the Brookings Institution found last year. That's even though the Department of Justice has found such agreements are illegal under antitrust laws.

Some franchises are ending their use of no-poach agreements, while state attorneys general are investigating others.

The Associated Press contributed to this report. 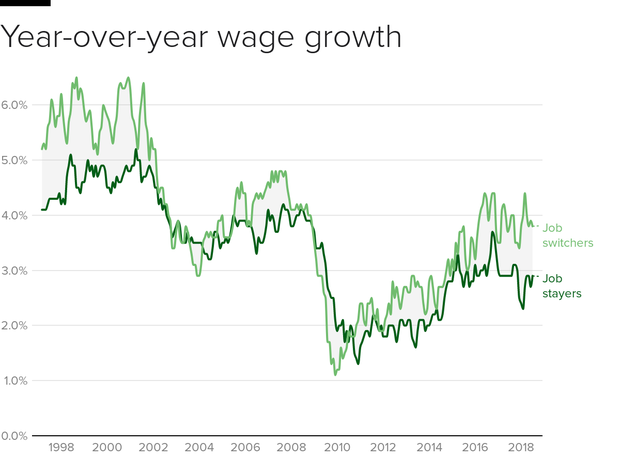