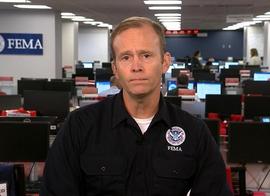 Hurricane Florence is projected to be "a devastating storm," according to the Federal Emergency Management Agency chief, as the Category 4 storm hurtles towards the coasts of North Carolina and Virginia. "This is going to be a marathon event," FEMA Administrator Brock Long said Tuesday on "CBS This Morning."

"This is not going to be a quick hit across the coast. And let's keep in mind that hurricanes can impact the entire states," Long said. FEMA is positioning its preparations from South Carolina to Delaware, he added, as the inland areas and mid-Atlantic states are projected to be inundated with "copious amounts of rainfall."

The North Carolina native urged people to take precautions ahead of the storm.

"I grew up in Newton, North Carolina. In 1989, Hurricane Hugo, the last land-falling Category 4 storm into the Carolinas, came right over my house. We were out of power for 10 days. I was out of school, if I remember, two weeks. And so this storm is setting up to be very similar to that one," Long said. "So we're really hoping that people will heed the governor's warnings in South Carolina, North Carolina, and Virginia, today. And make sure that you take proper precautions to get out of the storm surge areas and into facilities that can withstand the winds."

Long said there were many lessons from Hurricane Irma and Maria last year, but "it takes more than FEMA to appropriately respond and recover." He likened emergency response and management to "a chair with four legs."

"It takes the federal government, that's one leg, it takes the state and local government, that's the other leg. It takes the private sector and nongovernmental organizations, that's the third leg, and then it takes you, the citizen, as the fourth leg. And when all four of those legs go into a response and recovery, the chair's stable," Long said. "Emergency management does its job collectively. It's a whole community event. One of the things I like to remind citizens is that citizens are the true first responders for any small emergency to the large disaster. We depend on people being prepared and we don't have a real culture of preparedness in this country that we've got to work on." 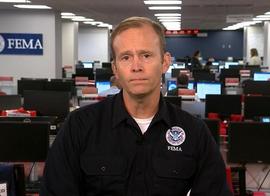