By Kate Gibson MoneyWatch September 10, 2018, 10:21 AM The most and least valuable college degrees

Few children may dream of growing up to be an actuary. But when it comes to getting the biggest bang for your buck from a college education, studying actuarial science may be the best bet both for landing a job and for maximizing your earnings without an advanced degree.

That's according to a new Bankrate study of 162 college degrees, which found that those who majored in actuarial science topped the list with an average unemployment rate of only 2.3 percent and annual salary of nearly $109,000 (see chart at bottom).

Or, as Krzysztof Ostaszewski, director of the actuarial program at Illinois State University, put it in a news release: "Being an actuary is the best job in America because you get paid like doctors and lawyers, but you don't have to work with blood or visit your clients in jail."

Other college majors in fields with higher pay and lower unemployment included business, science and math degrees. Meanwhile, zoology grads had an average salary of nearly $112,000, while unemployment in that area was a scant 1.4 percent, though most people also held advanced degrees.

Bankrate based its analysis on 2016 Census data.

Miscellaneous fine arts — essentially any degree that didn't fit in art history, music, drama or theater — is the least valuable major, Bankrate found. College grads with fine arts degrees had annual income of just under $41,000 and a jobless rate of 9.1 percent.

Other low-ranking majors included cosmetology and culinary arts, with average annual pay of just over $42,000 and a jobless rate 4.7, according to Bankrate.

Still, one expert cautioned against viewing a college major as the determining factor in one's career.

"The biggest myth we see is that by choosing a major, you're basically choosing the career you have for the rest of your life," Harry Twyman, director of The Major Experience at the UConn Center for Career Development, said in the release. "Business is a good example. A lot of students think if they want to go into the business field, they have to get a business degree when in fact we're seeing history graduates, English graduates and psychology graduates go into that field."

Twyman's program encourages students to explore different majors and helps them determine what professions they'd like to go into so they know the skills they need.

"Essentially all a major does is say, 'Hey, I studied a little bit more classes in this area than opposed to others,'" Twyman said. "Those big skills, for the most part, are built in any major." 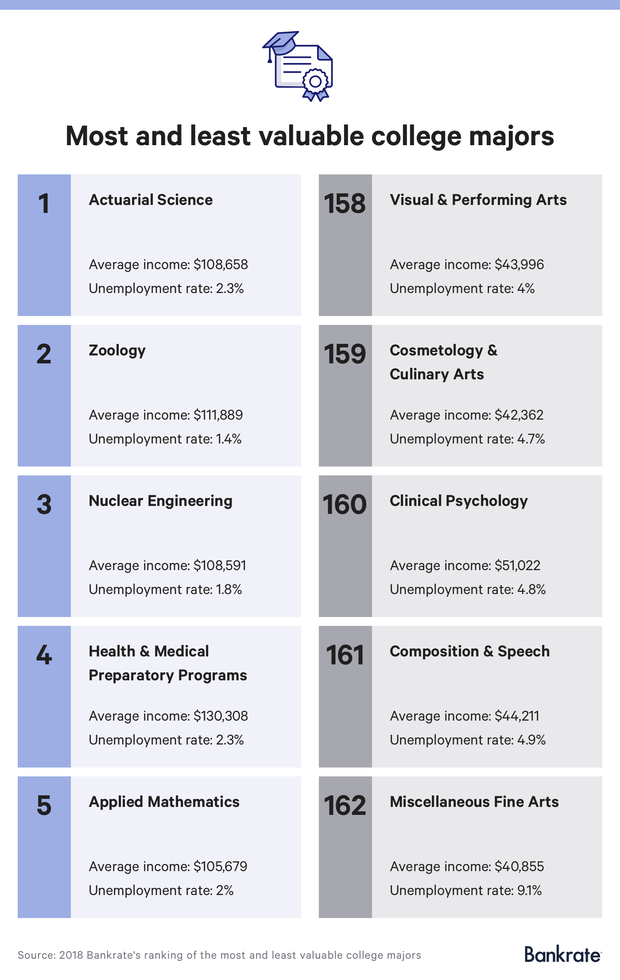