Emily Sioma, who competed in this year's Miss America competition as Miss Michigan, did not shy away from controversy during the pageant. Each contestant introduced herself, and when it was Sioma's turn to take the stage, she used the spotlight to address the Flint water crisis.

"From the state with 84 percent of the U.S. fresh water but none for its residents to drink, I am Miss Michigan, Emily Sioma," she said. In contrast, most of the other contestants introduced themselves by talking about their colleges and majors.

Flint's tap water became contaminated with lead in 2014 after officials switched from the Detroit system to the Flint River to save money. In 2014 and 2015, Flint didn't properly treat corrosive water that was pulled from the river. As a result, lead in old pipes contaminated the water going into homes and businesses, and it streamed from household taps as a brown and smelly fluid. Some children were found to have elevated lead levels in their blood, leading to long-term health concerns.

The EPA says there is no safe level of lead. Though multiple recent studies showed lead levels below the federal limit for more than two years, many Flint residents still do not believe the water is safe.

Viewers praised Sioma for bringing attention to the water crisis in her home state.

It's not the first time Sioma has stood up for a cause. During her college commencement, she protested speaker Michael Bloomberg's speech by standing silently during the address. She also wore a cap that said, "I survived," in reference to sexual assault.

Sioma did not win the title of Miss America, though. Instead, Miss New York, Nia Imani Franklin, took home the crown Sunday night in Atlantic City. 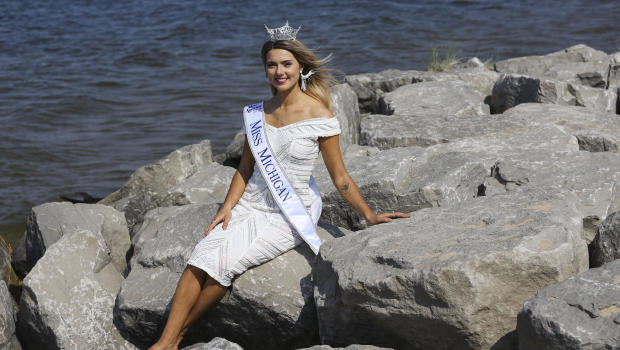