Begun in 1994, Starr's investigation into a failed real estate deal in Arkansas, known as Whitewater, evolved into a probe of the president's affair with White House intern Monica Lewinsky. It led to Mr. Clinton's impeachment and near-removal from office.

"Be careful about impeachment," Starr said on "CBS This Morning" Monday. "Impeachment is hell."

Starr (whose new book is "Contempt: A Memoir of the Clinton Investigation") says that he merely followed the course of his investigation, which began with Whitewater but ended up in with a tale of adultery in the Oval Office.

Co-host John Dickerson asked Starr, "When people talk about the current special counsel's investigation, they say it started to look into collusion but now it's finding its way to other places. Is there anything wrong with the prosecution that starts in one place and ends up somewhere else?"

"No," said Starr. "There are eerie similarities as to what's happening now as to what happened then. You just don't know what's going to come before you. The key is, there are checks and balances to make sure that the prosecutor isn't just doing anything and everything. The check at the time was for me to go to the attorney general and for the attorney general to go to the special division of the court and say, 'This has to be investigated: The president of the United States may be committing crimes or perhaps has committed crimes.' We've got to have a check and a balance. That's what we have in the Mueller investigation."

"Give me your assessment of the nation and its moral judgment it made on the president," asked Dickerson.

"I think that, first of all, the system did work. Our system of checks and balances worked; that is, the president was held accountable. He in fact had to answer to articles of impeachment. But at the same time the American people are very forgiving, and we also want stability. And so, one of the messages of this book is, be careful about impeachment. Impeachment is hell, and putting the nation through that process is really quite wrenching."

Dickerson said, "One of the [Trump] defense arguments that you seem to be alluding here to is, a lot of people said the country's doing well, the economy's humming, why are you going to pick on this president that's got the country going so well? And we hear that echo with President Trump [who] said, 'I don't think Democrats will impeach me since I'm doing such a good job.' Do you see parallels in that?"

"There are many parallels," Starr replied, "because I do think that in the 1990s, as I recount in the book, which is called 'Contempt,' and the contempt is because of Bill Clinton having been held in contempt by a federal judge – first time and only time, and hopefully it will be the only time in American history. So there are a number of parallels.

"But do you send a moral warning to the country to say, just because things are going well doesn't mean we should overlook these important questions about the rule of law, truth?" Dickerson asked.

"Absolutely. If we don't have the rule of law in the country, then we have not done what the founding generations said. We're here to establish justice. That's in the preamble of the Constitution. And justice means the rule of law, and that everyone is accountable."

"President Trump's legal team is considering whether he should sit down for an interview with Robert Mueller. Do you think he should?" asked co-host Norah O'Donnell.

Starr was asked whether an invitation to speak with prosecutors might be what Mr. Trump's attorney Rudy Giuliani has dubbed a "perjury trap" for the president.

"Respectable lawyers do not set up a 'perjury trap,'" Starr said. "They try to get the story: What's your version of the story? And it may be a story that conflicts with what another witness says. But I don't view that as a perjury trap."

"Would Mueller do that?" asked Dickerson.

"I don't think he would engage in a perjury trap, no. I have every confidence in Bob Mueller," said Starr.

"Contempt: A Memoir of the Clinton Investigation" by Ken Starr (Sentinel), available via Amazon 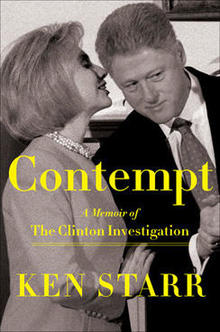