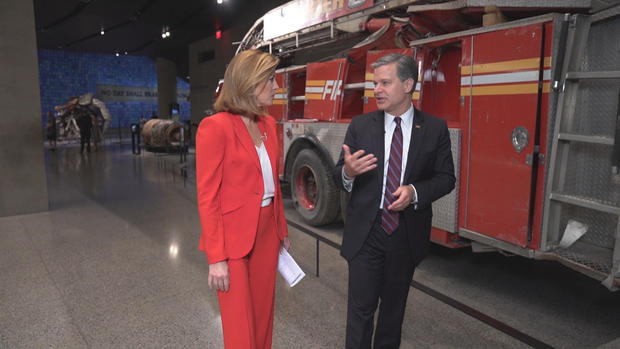 FBI Director Christopher Wray revealed for the first time that the bureau has made "about 120" terrorism-related arrests in the last year alone. "We had about 1,000 investigations into just these homegrown violent extremists. That's out of about 5,000 terrorism investigations," Wray told "CBS This Morning" co-host Norah O'Donnell. The first portion of their multi-part interview airs Tuesday.

It's been 17 years since 9/11, the deadliest terror attack on American soil. "We're safer," Wray told O'Donnell, but he acknowledged the terror threats have "evolved" to present new challenges. He said the FBI Joint Terrorism Task Force receives "about 15,000" tips a year, which works out to "basically 40 tips a day, two tips an hour."

He also said the FBI has thwarted numerous potential terror attacks even in the last year or so, citing threats to the San Francisco pier, a shopping mall in Miami, crowds at a Fourth of July celebration in Cleveland and in Minnesota, where a female college student was "recruiting classmates to join al-Qaeda and al-Shabaab."

"People think of the 9/11 threat, they think New York, they think D.C. Today's terrorism threat is everywhere, coast to coast, north, south, east, west," Wray said. "It's not just big cities," he said, pointing to a case in Harrisburg, Pennsylvania where a 21-year-old was allegedly inspired by the jihadist movement and "was circulating kill lists of U.S. service members, with names, addresses and photographs."

New and emerging cyber threats also contribute to the challenges. Wray said they were "at an all-time high."

"Terrorism today moves at the speed of social media," he said.

Watch Part I of Norah O'Donnell's interview with FBI Director Christopher Wray Tuesday, Sept. 11, on "CBS This Morning," which airs 7 a.m. to 9 a.m. ET/PT. Tune in for Part 2 on Thursday, Sept. 13. 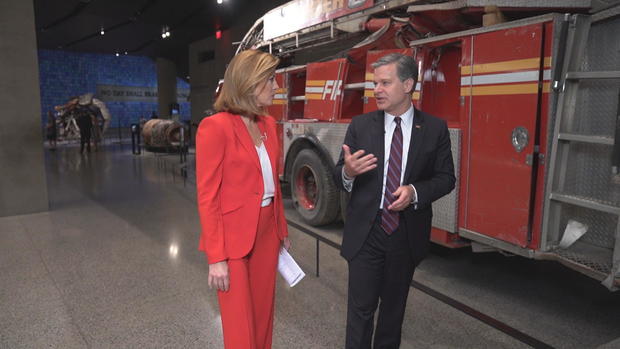