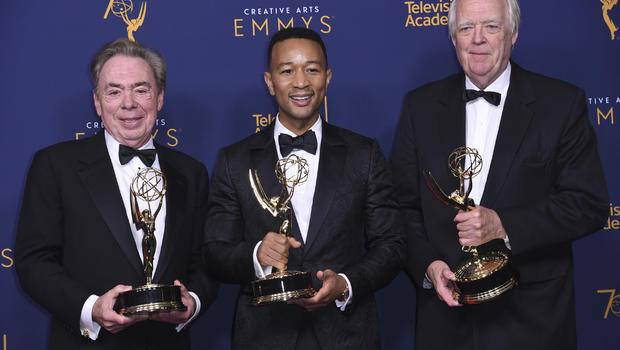 Lloyd Webber and Rice have already won Tonys ("Evita" and "Sunset Boulevard"), Grammys ("Cats," ''Evita") and an Oscar for "You Must Love Me" from "Evita." Legend has won 10 Grammys and in 2015 he scored an Oscar for his song "Glory" from the movie "Selma." Last year, he won a Tony for Best Revival of a Play as a co-producer of "Jitney." Legend, who played Jesus in the concert version of "Jesus Christ Superstar" but won his Emmy as a co-producer of the show, is also gunning for an acting Emmy later this month.

Legend's wife, Chrissy Teigen, posted of photo of all three men cradling their Emmys with the caption: "EGOT GOATS" – a reference to the term "greatest of all time."

Two other songwriters were also one Emmy away from the EGOT on Sunday – Benj Pasek and Justin Paul, whose song "In the Market for a Miracle" appeared in "A Christmas Story Live!" They previously won an Oscar for "La La Land," and a Tony and a Grammy for "Dear Evan Hansen." But their bid for EGOT status was derailed when the Emmy for Outstanding Original Music and Lyrics went to "Saturday Night Live" and their song "Come Back Barack" when Chance the Rapper was hosting.

The special trio of Legend, Lloyd Webber and Rice – officially the 13th, 14th and 15th members of the EGOT club – join an elite group of winners that includes Robert Lopez, Audrey Hepburn, Mel Brooks, Rita Moreno, Mike Nichols and Whoopi Goldberg. (Lopez, the "The Book of Mormon" and "Frozen" songwriter, who was 38 when he got EGOT status, is still the youngest to win all four awards. Legend is 39.)

Lloyd Webber told The Associated Press that he never considered achieving an EGOT because he's rarely dealt with television, but wanted to credit his old friend and prolific co-producer Craig Zadan, who died this summer, with shepherding the project. "This has always been his and I'm so grateful that he put so much of his energies into a rather wonderful show," he said.

The latest award caps a special year for Lloyd Webber, who turned 70 this year and whose autobiography, "Unmasked," came out in the spring along with a massive, four-CD collection of his songs performed by the likes of Barbra Streisand, Lana Del Rey and Madonna. He was the subject of a Grammy Awards tribute, and winter Olympic fans would have noticed Lloyd Webber soundtracks for several skaters.

"Jesus Christ Superstar Live In Concert" beat out the telecasts of the Grammys, the Oscars and the Golden Globe, as well as the benefit show "Night of Too Many Stars" on HBO. 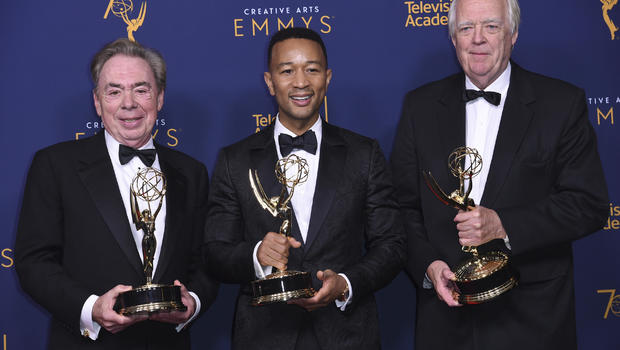