A Billings, Montana high school senior went viral Thursday for the facial expressions he made in prime seating at President Trump's rally. During the rally, Tyler Linfesty was asked to leave and was replaced a woman who he believes was a campaign staffer, CBS Billings affiliate KTVQ reports.

The 17-year-old went viral with the hashtag #PlaidShirtGuy during Mr. Trump's rally for his looks of disbelief and raising his eyebrows. At one point, Linfesty was caught mouthing "what?" when Mr. Trump is speaking. During the rally, he pinned the rose emblem of the Democratic Socialists of America on his shirt, the Billings Gazette reports.

Linfesty told KTVQ that he won VIP tickets, which also got him a picture taken with Mr. Trump. Linfesty said Mr. Trump "gets the crowd really riled up, but the important part is to listen to the content of the speech."

He told the Billings Gazette that he was told to "keep clapping, you have to smile, you have to look enthusiastic." But, he said, "I had to be honest in my views."

Linfesty told the Billings Gazette that a woman he recognized as a campaign staffer from earlier escorted him to a back room where police and Secret Service looked at his ID. After about 10 minutes, they told him to leave.

"They treated me fine," he said. "They just told me not to come back."

The two friends he attended the rally with were also asked to leave. 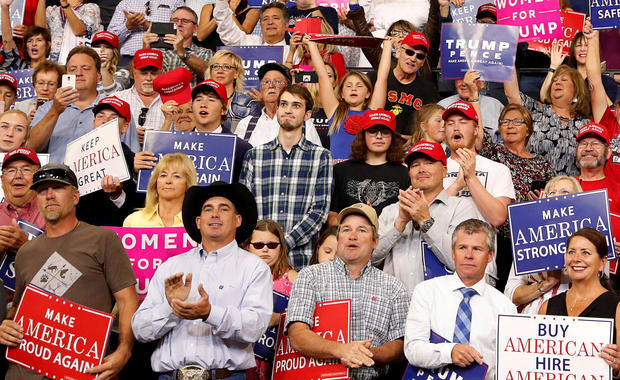