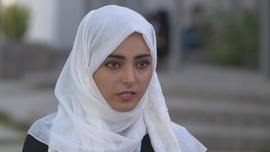 By Charlie D'Agata CBS News September 6, 2018, 6:34 PM Student shot in 2016 attack in Afghanistan fears for her life more than ever

KABUL, Afghanistan — Relentless violence in Afghanistan has surged in recent days, with four attacks in 24 hours leaving at least 40 people dead. There are endless checkpoints in the capital Kabul, and blast walls have turned parts of the city into a fortress.

The American University of Afghanistan looks more like a maximum security prison, with good reason. The school came under attack in August of 2016. Taliban suspects went on a 10-hour rampage, killing 16 students, faculty and police.

"I heard them yelling at other students and throwing grenades in the building," said student Breshna Musazai, who watched them blast their way onto the compound.

She couldn't run from the gunman because of a limp from childhood polio.

"When he shot me I started to pretend to (be) dead because I thought this is the only thing I can do to save myself. After that he shot me again to make sure I'm dead," Musazai said.

A university trustee sponsored a trip for medical treatment in Dallas. She returned to school last year and graduated in May with honors.

But she fears for her life more than ever.

"When I leave home I know that I might not go back home alive," she said.

Because the situation has deteriorated even further since that attack, the threats are everywhere. There are insider attacks against Afghan and U.S. forces. In Kabul, despite checkpoints, nobody seems capable of stopping the Taliban or the Islamic State of Iraq and Syria (ISIS) from striking the capital.

It's been 17 years of war. An estimated $1 trillion later, real security remains out of reach. 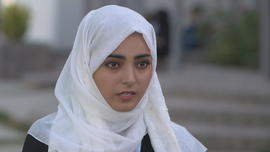