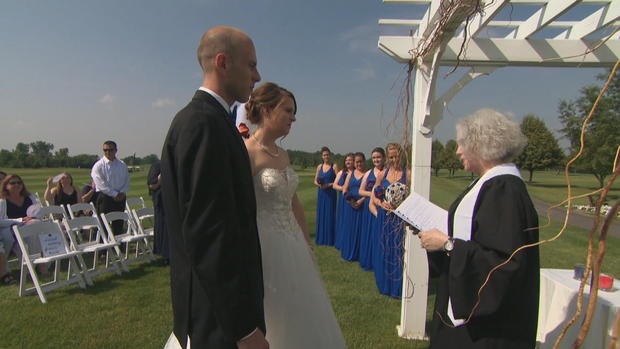 Our series, A More Perfect Union, aims to show that what unites us as Americans is far greater than what divides us. In this installment, we're exploring how a growing number of people are choosing to get married with help from someone who knows them best. That's exactly what Melissa and Dotan Schips did. CBS News' Vladimir Duthiers spoke to them just an hour before they got married.

The union of Melissa Curie and Dotan Schips was led by the one person who knows how far they've come. Though she looked the part, Flo Hunt's day job isn't officiating weddings.
"She had just been that one person that had always been there through the good times and the bad … and probably knew more about us than we knew about ourselves and our relationship," Melissa said.
Melissa and Dotan first met Flo – Professor Hunt – in their study abroad program in London.

"When we came back, it wasn't like, OK, had a great time, see you later. She followed up with us, she kept in touch with us. … She was a big part of our life," Dotan said.

"It's the way they looked at each other. And I know all couples in love look at each other cow-eyed and everything. But theirs was different. … And I figured that maybe it wouldn't last, but I also knew that they would find their way back to each other," Flo said.

And they did – through a text. Melissa and Dotan picked up right where they left off and two years later, they were engaged.

"I don't think she was that surprised because I think she knew it, she saw it coming the entire time," Melissa said of telling Flo they were getting married.

"I like to think it's because they adore me and wanted to have me teach at them one more time," Flo said.

Flo was so determined to be there for Melissa and Dotan's big day that even after having a double mastectomy earlier this year, she pushed off her scheduled reconstructive surgery to be there to officiate. She says there's nothing she wouldn't do for her students, whom she considers her children. 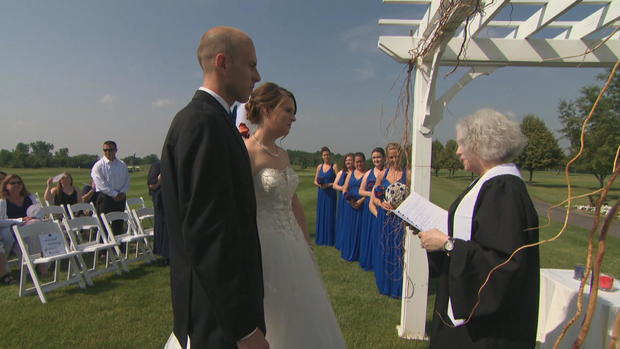