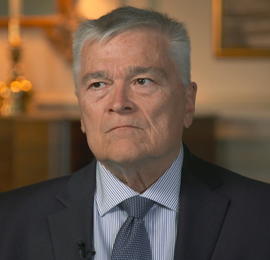 The North-American Interfraternity Conference this week announced tough new restrictions on hard liquor in all fraternities following a settlement between the family of Penn State student Timothy Piazza and his fraternity, Beta Theta Pi, where the 19-year-old died during a hazing ritual last year.

There's been at least one hazing-related death in the U.S. every year since the early 1960s. Penn State President Eric Barron tells CBS News' Jericka Duncan about his personal mission to prevent future tragedies.

"It needs to be very clear that if you engage in behavior that harms somebody physically or mentally to a level of near death or serious consequences, that can't be a misdemeanor," Barron said.
Barron says reforming laws to make hazing a felony is just one of the causes he's been fighting for over a year and a half, ever since Timothy Piazza died in a hazing incident on his watch.

Parents Jim and Evelyn Piazza have formed a unique relationship with Barron, working together to end hazing nationwide.

"We thought you know we can kind of go to battle with him and the university or we can try to work with him and try to effectuate change," Jim Piazza said. "Not that we don't have our differences, we do, and there are things that we don't agree on. We don't agree on everything but it's important for us to work closely with him, with the university to make changes here."
Some of those changes include a national database to monitor Greek life like fraternity GPAs, sexual assaults and any alcohol violations.
"When I'm choosing as a student or as a parent, I can look at it and say, 'Now wait a minute, that house, the freshmen have a 1.9 grade point average. Do I want to risk my academics to join that one?'" Barron said.

But Timothy's fraternity, Beta Theta Pi, had a stellar record with an average 3.8 GPA.

"It was a – it looked very good on the outside. And there are other things here that have a different type of effect on behavior. We're working with the Piazzas on an anti-hazing law," Barron said.

Last week, Barron invited the Piazzas to visit Penn State and speak to the heads of fraternities and sororities.

"We've gotten really good feedback. We've had young men look us in the eyes, burst into tears, give us hugs and just promise us that it wasn't going to happen on their watch," Evelyn said.

Despite the fact that at least one person has died in a hazing incident every year since 1960, the Piazzas are hopeful this year will be different. The university says it's already seeing progress.

"There is substantial change in awareness," Barron said. "I think that gives us a lot more strength to begin to move forward aggressively in fixing it but we're not done yet."

The Piazzas are also fighting for justice in court. The more serious charges of involuntary manslaughter were recently dropped but charges have been filed, dismissed, and re-filed against more than 25 former fraternity brothers. Three students pleaded guilty and one is now under house arrest. 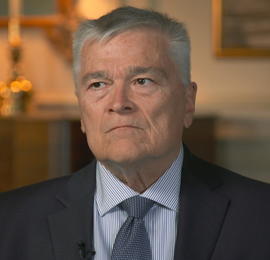