President Donald Trump is praising the "Trump Economy," touting how its "booming" numbers are a reason to add work requirements for food stamps. But new government research shows that hunger remains higher than it was before the Great Recession.

About 11.8 percent of Americans were "food insecure" in 2017, representing about 15 million households, according to data released on Wednesday by the U.S. Department of Agriculture. That's down from 12.3 percent a year earlier, but still higher than the pre-recession rate of 11.1 percent in 2007, the agency said.

Food insecurity, defined as failing to have enough food because of a lack of money or other resources, is a closely watched measure of hardship. The problem, say poverty experts, has never truly been solved since President Lyndon Johnson launched his "war on poverty" in the 1960s, which included food stamps. Hunger still touches every state in the country, the USDA said in its latest report.

"The first thing is to acknowledge that it's down, and it's a statistically significant decline from last year, but it's still 40 million people experiencing food insecurity, and we're still not quite back to the pre-recession levels of 2007," said Elaine Waxman, senior fellow at the Urban Institute.

President Trump tweeted his support for adding work requirements to food stamps on Wednesday morning, citing the growing economy as one reason for adding the stipulation.

Even though the economy is improving, the benefits aren't necessarily reaching the poorest Americans. And adding work requirements could lead to higher hunger and food insecurity rates, poverty advocates say.

To be sure, most people who receive food stamps who can work are already working. But many of them are locked in unstable, low-paying jobs that don't guarantee steady hours each week or month, Waxman noted.

"If you don't work those hours every month, then your benefits will be jeopardized," she noted. "We know that the kinds of jobs that are often available for people with less education come with unstable schedules. You might work 40-plus hours in landscaping in the summer, but the winter hours are much lower."

About two-thirds of food-stamp recipients are elderly, disabled or children.

Anti-hunger activists warn that adding work requirements could worsen food insecurity because of the hurdles the program would present to low-income Americans. Consider Maine, which imposed work requirements for its Supplemental Nutrition Assistance Program (SNAP) in 2014 under Governor Paul LePage's push to reform its welfare programs.

Food insecurity in the state has increased by 1 percentage point from the two years prior to the recession through 2015-2017, the USDA report found.

The federal Farm Bill, like Maine's requirements, would cut off able-bodied adults without children from food stamps if they can't prove they're working at least 20 hours a week.

But some advocates point out that low-income workers often have jobs where employers don't guarantee hours, such as retailers that rely on just-in-time work scheduling. A worker might get 25 hours one week, but find their hours cut to 10 hours the following week.

The Americans who are most likely to experience food insecurity include households with children, unmarried men and women and black and Hispanic households. 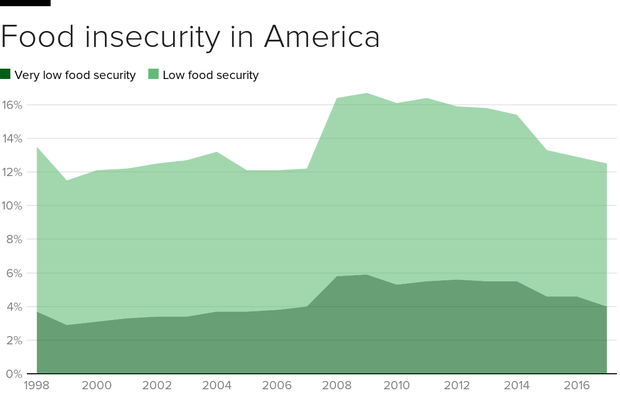 Amazon workers are listening to what you tell Alexa

Tax refunds are lower for second week in a row