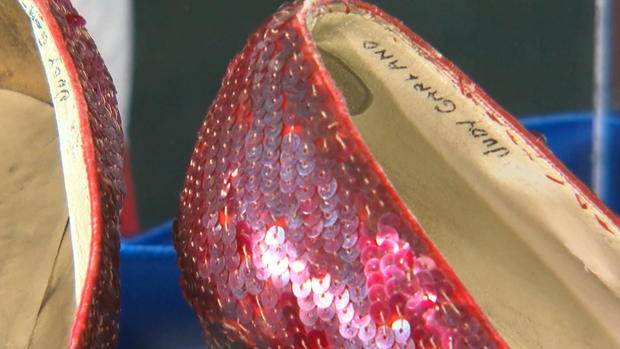 CBS News September 5, 2018, 9:25 AM Owner of "Wizard of Oz" ruby slippers says they're as "pristine" as before they were stolen

A pair of the red slippers worn by Judy Garland in "The Wizard of Oz" stolen 13 years ago have finally stepped back into public view. The FBI announced Tuesday that they recovered the iconic footwear used in the classic 1939 movie in a sting operation.

"My knees buckled when I was on the phone and they said the shoes were stolen and the only thing I could blurt out was, 'Get them back!'" Michael Shaw, the owner of the shoes, told CBS News' Lee Cowan.

He'd loaned them to the Judy Garland Museum in Grand Rapids, Minnesota, but in August 2005, someone broke in and made off with them on a magic broom or something – they just disappeared. The alarm did not sound to a central dispatch system and no fingerprints were left behind, just a single red sequin.

For 13 long years, the museum had replicas in their place. Like the man behind the curtain, no one saw the originals again until Tuesday. The FBI authenticated them – one of only four known pairs – by comparing them to the ones in the Smithsonian.

"It turns out they're not only intact they are as pristine, I was told, as when I put them on display? So yay!" Shaw said.

Authorities aren't saying how they got them back, other than it involved a sting operation set up to bust an extortion plot. They've made no arrests but vow to hunt down whoever is responsible with the same tenacity as the Wicked Witch of the West.

Maybe they'll leave the dog out of it. 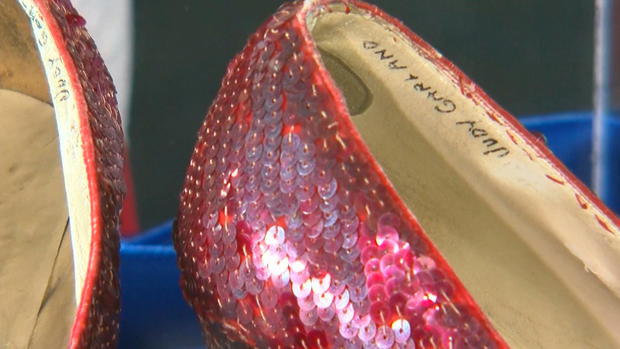