The 44-year-old's upset over a 10-term incumbent congressman underscores the shift underway in a Democratic Party whose base is seeking younger, more diverse candidates. Her victory comes just two months after Alexandria Ocasio-Cortez similarly defeated a top House leader in a primary for a New York congressional seat.

Pressley is now on track to represent an area of Massachusetts once served by Democratic icons Tip O'Neill and John F. Kennedy.

"Change is coming and the future belongs to all of us," Pressley told wildly cheering supporters Tuesday night.

A subdued Capuano told supporters he did everything he could to win re-election. "Apparently the district just is very upset with lots of things that are going on. I don't blame them. I'm just as upset as they are, but so be it. This is the way life goes," he said.

The race between Capuano and Pressley was perhaps the most closely watched contest in Massachusetts. The challenge from Pressley, the first black woman to serve on the council, had drawn some comparisons to Ocasio-Cortez, who defeated 10-term New York Rep. Joe Crowley in a stunning upset in a Democratic primary in June. Both races highlight rifts within the Democratic Party, with many younger voters embracing new and more diverse political leadership.

Democratic U.S. Sen. Elizabeth Warren sailed through the primary unopposed. She'll face Geoff Diehl, a state representative who served as co-chair of President Donald Trump's 2016 campaign in the state and defeated two other Republicans for his party's nomination.

Another veteran congressman, Democratic Rep. Richard Neal, won a spirited primary showdown with Tahirah Amatul-Wadud, a black attorney from Springfield who had hoped to become the first Muslim to serve in Congress from Massachusetts. Neal, the dean of the state's House delegation, first was elected in 1989.

Another Democrat, U.S. Rep. Niki Tsongas, is retiring at the end of this term, and that open seat touched off a political scramble with 10 candidates on the Democratic primary ballot.

Republican Gov. Charlie Baker won his party's nomination for a second term, defeating Scott Lively, a conservative minister and staunch supporter of Trump who frequently called Baker — a frequent critic of the president — a RINO, or Republican in Name Only.

Baker, a moderate who has been popular with voters in what is perceived as one of the nation's bluest states, will face Democrat Jay Gonzalez in November. Gonzalez served as secretary of administration and finance under Democratic Gov. Deval Patrick.

Neither Gonzalez nor his primary opponent Democrat Robert Massie, a longtime political and environmental activist, was well-known outside of party activist circles. Both contended that Baker's support among voters was soft and that his administration had failed to make significant strides in many areas, particularly the problems plaguing the Boston-area transit system known as the "T." 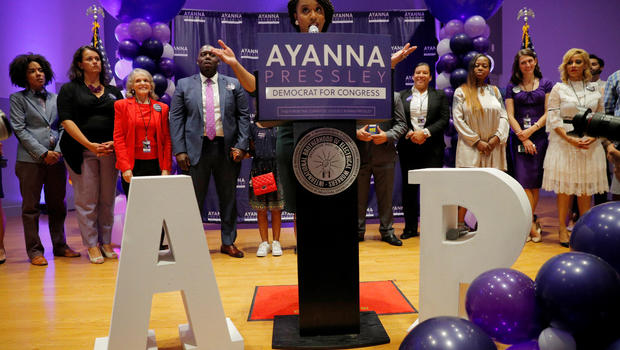