LONDON — A tentative deal was reached Wednesday to resolve a conflict dubbed the "Scallop Wars" over fishing rights off France's coast, British and French officials said. Officials and industry representatives said after talks in London that "an agreement on the principles of a deal has been reached" with details to be ironed out in Paris on Friday.

The talks followed an incident last week in which French and British fishermen angrily bumped boats over access to fisheries off the French coast near Normandy. About 35 French boats confronted five British ones, sometimes banging hulls, in international waters during the incident.

Some of the richest scallop fishing is on the French side of the English Channel, CBS News foreign correspondent Elizabeth Palmer reports. It attracts fishermen from both countries eager to cash in on the lucrative delicacy.

Clashing international rules said the English boats could fish anytime while the French were forced to wait until Oct. 1.

A joint statement Wednesday said that a previous agreement involving British boats 15 yards and over will be renewed. In addition, the agreement calls for smaller vessels to be included in the deal "subject to a reasonable compensation package" still to be finalized.

"In the meantime, there is a voluntary agreement for all U.K. vessels to respect the French closure period" in the disputed area, officials said. British Fisheries Minister George Eustice said the goal of Wednesday's talks was to reach a new agreement that would prevent more confrontations.

An agreement reached in 2013 had broken down, leading to the clashes. 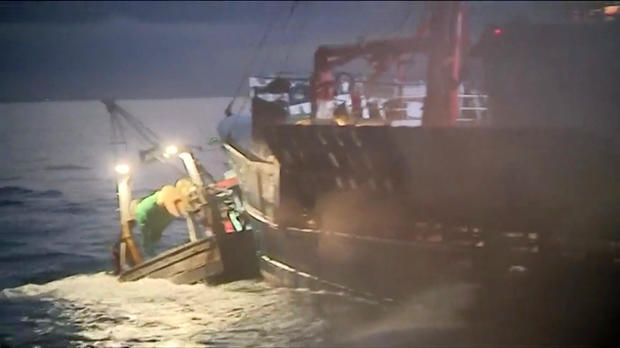 Target to open Disney shops in some stores this fall