Thirty more people have been sickened in a multi-state salmonella outbreak linked to Kellogg's Honey Smacks cereal, according to the Centers for Disease Control and Prevention. In total, there have been 130 cases in 36 states since the outbreak was announced earlier this summer.

Thirty-four people have been hospitalized as a result of illnesses after eating the contaminated cereal. No deaths have been reported.

The CDC is advising consumers and retailers not to eat, serve, or sell any Kellogg's Honey Smacks cereal.

"Do not eat any Kellogg's Honey Smacks cereal. This advice applies to Honey Smacks in any size package and with any 'best if used by' date," the CDC said in a statement. Even if some of the cereal has been eaten and no one got sick, throw the rest of it away or return it for a refund, the CDC advised.

All boxes of the cereal should have been taken off store shelves, but the U.S. Food and Drug Administration reports that it is still being sold in some locations despite the recall earlier this summer.

The cereal has a shelf life of one year and could still be in many people's homes, the CDC says.

Salmonella is a bacteria that can make people sick with diarrhea, fever, and stomach cramps. Symptoms usually appear within 12 to 72 hours of eating food contaminated with the bacteria. If you have symptoms of a salmonella infection and have recently eaten Kellogg's Honey Snacks cereal, talk to your doctor.

While most people recover within a week, some illnesses can last longer and be very severe, especially in young children, older adults, and people with compromised immune systems.

Each year, salmonella causes about 1.2 million illnesses, 23,000 hospitalizations, and 450 deaths in the U.S., the CDC estimates.

The CDC recommends checking your pantry at home to see if you have any Kellogg's Honey Snacks cereal. If you do, throw out the cereal or return it to the store for a refund.

Additionally, if you store cereal that looks like Kellogg's Honey Smacks in a container without the packaging and do not remember the brand or type, throw it away. Wash the container thoroughly before using it again to remove any harmful germs that could contaminate other foods.

The FDA urges anyone who sees Kellogg's Honey Smacks cereal for sale to report it to the agency. 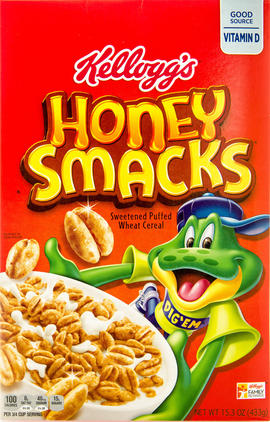 Before it went bust, Sears was the Amazon of its day