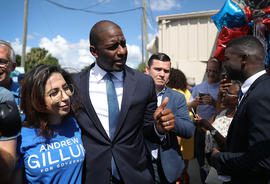 Florida Democratic gubernatorial nominee Andrew Gillum could have his campaign dragged down by an FBI investigation into Tallahassee town hall, according to a report by CNN. Gillum is the mayor of Tallahassee.

Gillum won the Democratic nomination Aug. 28. He has not been implicated in the FBI's investigation.

"He is embroiled in a lot of corruption scandals," Rep. Ron DeSantis, Gillum's Republican opponent, told Fox News after the primary win. "This guy can't even run the city of Tallahassee. There is no way Florida voters can entrust him with our entire state."

Gillum has long maintained that the FBI told him he was not a focus of the investigation. His campaign officials are trying to paint DeSantis as the corrupt official.

"Mayor Gillum is not a subject of the FBI investigation, and he's committed to rooting out any corruption or wrongdoing in Tallahassee," said Geoff Burgan, Gillum's spokesman told CNN. "We're not going to take ethics lectures from Congressman Ron DeSantis, who is marching in lockstep with the most morally, ethically and legally challenged President in American history."

Gillum has not been named in any of the subpoenas, but the investigators did compel information from Adam Corey, a lobbyist and longtime Gillum friend, according to media reports. Corey, who volunteered as campaign finance chair for Gillum's 2014 campaign, has had his emails posted online, at Gillum's direction.

The FBI has not commented on the investigation.

Corey is a controversial character in Gillum's political history. The Tallahassee Democrat reported in 2015 that Gillum's 2013 decision as a city commissioner to vote to fund a multimillion-dollar project tied to Corey raised questions because of their friendship — they have known each other since college — even though city lawyers decided that Gillum did not have a conflict of interest.

Those questions grew when the paper reported on Gillum and Corey going on a trip together in Costa Rica, where they agreed to meet with Mike Miller, an FBI agent posing as a developer, once they were back in Florida. Questions have also been raised about a 2016 trip to New York, where Corey and Miller were also present.

According to public documents, three FBI agents posed as developers to build relationships with city officials and lobbyists in an attempt to combat public corruption. The FBI subpoenaed thousands of records in June 2017, and Gillum's office then posted those records online. Reporting by the Tallahassee Democrat found that several city officials and power brokers were named in the subpoenas, but Gillum's campaign has denied any connection to the probe.

Nonetheless, the investigation has been used by Republicans seeking to sink Gillum's campaign. The Republican Governors Association has released a digital ad on the investigation, and Jon Thompson, a spokesman for the group, told CNN that it is likely just the beginning.

"This FBI investigation will haunt Andrew Gillum's gubernatorial campaign and will be a very lethal attack," he said.

Gillum has promised he'll cooperate with the FBI, telling CNN on Sunday, "We want to make sure that any individual that participated in that is held fully accountable. The good news is, is that it doesn't involve my government or myself. We have all been fully cooperating."

No charges have yet been filed as a result of the Tallahassee investigation. 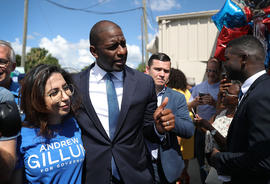