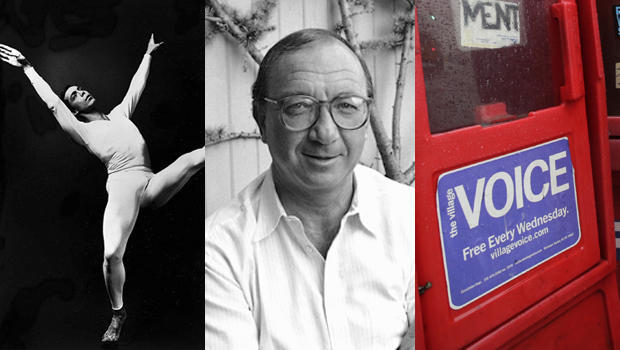 "Sunday Morning" remembers the passing of a modern dance giant, an award-winning playwright, and a storied alternative paper:

An iconic figure in the world of dance, Taylor created works of scintillating athleticism and humor. A Juilliard graduate, Taylor founded his own company at age 24, collaborating with artist Robert Rauschenberg on his first production. A year later he became a soloist for Martha Graham, while continuing to shape his own company into one of the world's most successful contemporary troupes.

The pairing of classical music with modern dance was one of Taylor's hallmarks. His signature work was 1975's "Esplanade," a joyful scene of dancers hurtling themselves at each other, set to concertos by Bach.

To date, the Paul Taylor Dance Company has performed in more than 540 cities in 64 countries. His modern dances are in the repertories of leading ballet companies around the world, and have been danced by such artists as Mikhail Baryshnikov and Rudolf Nureyev.

Taylor received countless awards and honors, including a MacArthur "Genius Award" and a Kennedy Center Honor, in 1992. He also won an Emmy Award for the PBS production of "Speaking in Tongues."

Taylor kept working well into his 80s; he created 147 dances in all during his 64-year career.

In 1995 "Sunday Morning" correspondent Eugenia Zuckerman asked Taylor what it is in dance that still fascinated him. "The unknown," he replied. "The moment just before the curtain goes up and what is going to be there. What can be there? What new world? What new paths? I think of dance and dancers as being a giant thing. They're bigger than life. I think they should be. And they're special people."

Prolific playwright and screenwriter Neil Simon, who died on Sunday, August 26, at age 91, had a difficult childhood growing up in the Bronx, as his father frequently left the family. Humor helped get him through the difficult times.

"Well, it explained things to me anyway," he told "Sunday Morning" in 2006. "It made it easier to deal with if you were able to laugh at it."

Simon often used his own experiences for comic material, from "Biloxi Blues" to "Brighton Beach Memoirs" and "Broadway Bound." Writing gags for TV, especially Sid Caesar's "Your Show of Shows," would also inspire his play "Laughter on the 23rd Floor."

Many of his biggest Broadway hits, including "Barefoot in the Park," "The Odd Couple," "Last of the Red Hot Lovers," "Sweet Charity," "The Prisoner of Second Avenue," "Plaza Suite," "The Sunshine Boys" and "Chapter Two," would be adapted for films and TV. He also wrote original screenplays, including "After the Fox," "The Heartbreak Kid," "The Out-of-Towners" and "The Goodbye Girl."

In all, Simon earned four Oscar nominations, won three Tony Awards and a Golden Globe, and received the Pulitzer Prize (for "Lost in Yonkers").

Being the toast of Broadway meant something quite personal for Simon. As he told "Sunday Morning," "Many times I would go to the theatre and stand in the back and people would come up and they say, 'How do you know my father?' 'How do you know my cousin?' I seem to have touched that aspect of their lives that's familiar with them as familiar with me … Making a connection with millions of people is pretty good!"

On Friday, The Village Voice, an independent weekly newspaper that has covered politics, activism and the arts in New York City with ferocity, moxie and barbed humor for more than six decades, was shut down for good.

While its critics would promote and dissect the auteur theory of filmmaking, the paper also backed the Obie Awards for Off-Broadway productions, and posted an annual "Pazz & Jop" music poll. And in the decades before social media, the paper's classified ads were a fixture of New York's singles scene (not to mention a fortuitous way for a budding art collector and Andy Warhol to meet up).

The Voice would earn three Pulitzer Prizes during its tenure, but financial pressures forced its current owner, Peter Barbey, to cease publishing its print edition in September 2017; it became an online-only resource.

Less than a year later, The Gothamist reported that on Friday Barbey announced to what was left of his employees that there would be no more editorial stories produced. Half of the staff was immediately let go; the rest were kept on to "wind things down," as it was described.

In an understatement unworthy of a paper that rarely understated things, Barbey was quoted as saying, "Today is kind of a sucky day."

The Village Voice was 62. 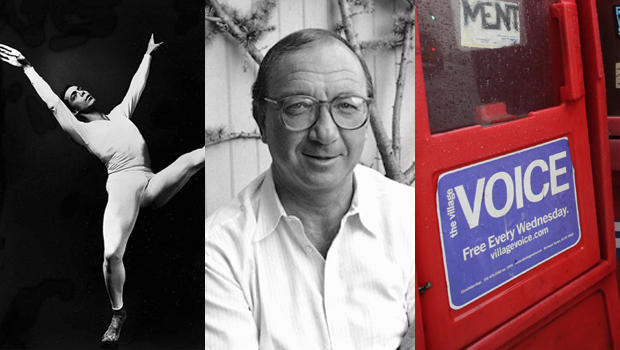