By Kate Gibson MoneyWatch August 31, 2018, 2:03 PM Americans still support unions — even if they don't belong to one

Organized labor has continued to lose members, but still retains the support of a majority of Americans, according to a Gallup poll released Thursday. Sixty-two percent of Americans approve of unions, with a majority back them regardless of gender, education, age or place of residence, the survey shows.

Where opinions divide, not surprisingly, is along party lines: 80 percent of Democrats voice support for collective bargaining rights, versus only 45 percent of Republicans, the nationwide survey of roughly 1,000 adults, conducted earlier in August.

Support for unions among both Democrats and Republicans fell sharply in 2009 in the aftermath of the recession. But sentiment toward labor has improved as the economy recovered, Gallup noted.

Although most Americans approve of unions, they also remain wary of organized labor, the survey shows: Well under half of respondents, at 39 percent, want unions to exert greater influence in the U.S., while 29 percent think they should have less sway.

Overall, the American public has supported organized labor since Gallup first started tracking it in 1936, when the labor movement was in its early stages. During the 1950s, U.S. support reached 75 percent, and union membership peaked at 28 percent in 1954, Gallup said. Around a quarter of workers belonged to unions until 1972.

As of 2017, some 34 percent of public-sector employees were unionized, while less than 7 percent of private-sector workers were union members, labor data show.

While American attitudes toward unions are mixed, many experts attribute stagnant worker pay over the last four decades in part to eroding collective-bargaining power.

Speaking last week at a luncheon at the Kansas City Federal Reserve's annual conference in Jackson Hole, Wyoming, Princeton University economist Alan Krueger noted that wage growth this year remains tepid despite the low rate of unemployment. He suggested the decline of unions has stripped workers of the leverage they need to negotiate better pay raises from employers.

"My theme is that declining worker bargaining power can help explain the puzzle du jour of relatively weak wage growth despite historically low unemployment in the U.S.," Krueger, chairman of the Council of Economic Advisers during the Obama administration, said in prepared remarks.

Another factor holding down wages is the fact the the federal minimum wage of $7.25 an hour has not changed since 2009, Krueger also said. 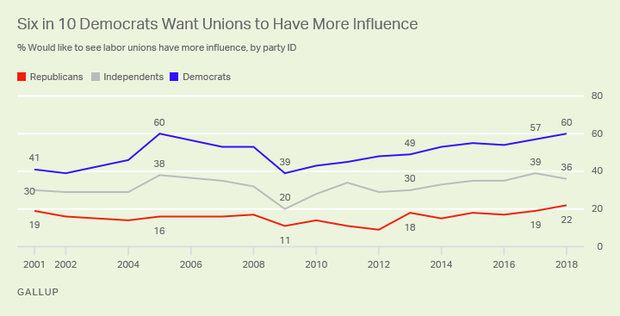