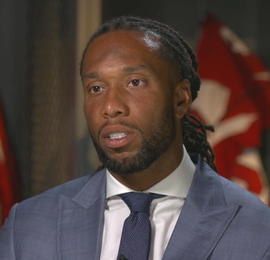 Our series, A More Perfect Union, aims to show that what unites us as Americans is far greater than what divides us. In this installment, we're sharing the story of Senator John McCain's close friendship with Larry Fitzgerald of the Arizona Cardinals. He's considered one of the NFL's greatest wide receivers. He'll be among those delivering eulogies at McCain's memorial Thursday. They're two men from different generations and backgrounds but as CBS News' Jamie Yuccas shows us, they're both proud Americans.

Arizona Sen. John McCain and Larry Fitzgerald were friends for more than a decade. When the two first met, McCain had already been in the Senate for almost 20 years while Fitzgerald was an unknown rookie.

"I wasn't like any star by the imagination. I was just another player," Fitzgerald said. "He wanted to know how I was doing, what my plans were after football. And you know giving me advice on family and leadership and all these things I didn't necessarily think I needed but he saw that I needed it and he took it upon himself to kind of impart some of that wisdom to me."

Fitzgerald was so moved by McCain's interest in him that he decided in 2013 to visit Vietnam to see where McCain was held as a prisoner of war for five and a half years.

"To be able to see it personally it made a profound impact on me," Fitzgerald said.

He said he'll miss the senator's charisma, intelligence and insightfulness the most.

"He sacrificed not only himself, his time, his health, his well-being for this country and he's going to leave a lasting legacy," he said.

They kept in close touch over the years. The senator praised Fitzgerald when he introduced him at a McCain Institute forum in 2015 and McCain would often show up at Arizona Cardinals games. Fitzgerald last visited McCain and his wife Cindy at their home near Sedona in February.

"He never said, 'Why is this happening to me, Larry? You know, I don't understand why after all the dedication, all the sacrifices I've made why is it me?' He never said that," Fitzgerald said.

"The thing that I took away that always resonates with me is the strength that he always showed. The strength of dealing with the ordeals of being a POW or the strength of being graceful in defeat… The strength to overcome and to be classy and a good sport and respectful of other people's feelings," he said.

Over the weekend, Fitzgerald joined his teammates in observing a moment of silence. He says he's tremendously humbled that his good friend wanted him to deliver one of Thursday's eulogies.

"I don't think I'm worthy to be up there, to be honest with you," Fitzgerald said. "You know, I'm really humbled by it."

The message he wants to convey in his speech: Embrace your differences.

"There are so many differences between the two of us and it didn't matter. It's about just loving people for who they are and I think I'm going to do my best to convey that message." 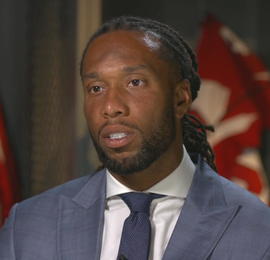