By Jillian Harding MoneyWatch August 30, 2018, 5:15 AM Despite stronger economy, many Americans still need help with food

By some measures the U.S. is hitting its stride, with unemployment near record lows and strong consumer spending helping propel the nation's quarterly growth to a four-year high. But within the cracks of the economy many people continue to struggle meeting their basic needs, including putting food on the table.

In Indiana, which ranks No. 11 in the U.S. in sales of agricultural products, nearly 20 percent of residents have lacked money for food sometime within the past 12 months, according to a recent report by the Food Research and Action Center, a nonprofit group focused on eliminating poverty-related hunger.

Food insecurity — defined as not having enough food because of a lack of money or other resources — is a daily problem for roughly one in eight Americans, statistics show. That rate remains higher than before the recession, when the numbers were slightly more than one in 10, according to data from the U.S. Department of Agriculture.

The evidence for such hardships isn't found only in statistics, however — it's also visible in the nation's overworked food banks.

"Even though the economy has been improving, it's not improving across the board for everybody," Sarah Estell of the Gleaners food bank told WTTV reporter Trevor Shirley. "There is hunger in every county, a meal gap in every county, in the state of Indiana."

The food bank, located in central Indiana, partners with hunger relief agencies and schools to supply items throughout 21 counties in the state. Last year, Gleaner's provided meals to more than 300,000 food insecure people.

Nationwide, Indiana is the rule, rather than the exception, with food insecurity even more prevalent in other states. According to the Food Research and Action Center, Indiana ranks No. 20 for the worst food hardship rate in the country.

"There's nothing more stressful than knowing that at the end of the night you've got to put your child to bed and that child is asking you, you know — if he's hungry," one food bank patron told WTTV.

The three states with the most severe food gaps are Mississippi, Louisiana and West Virginia, with more than 20 percent of households in each struggling to get enough to eat.

One reason people struggle to afford food, according to experts: Many residents have jobs that earn too much for them to qualify for federal aid, yet lack sufficient income to get by on their own. Many families also don't qualify for the federal Supplemental Nutrition Assistance Program, better known as food stamps. Almost half of the 41 million Americans who are defined as "food insecure" aren't eligible for food stamps, Feeding America found.

"The minimum wage, adjusted for inflation, is now set about … 20 percent below the level it was in 1968, so we have many more people who work full time but earn a wage that leaves them in or at the poverty line," Bob Greenstein, president of the Center on Budget and Policy Priorities, a left-leaning think tank, said in a recent interview with CBSN. Food stamps are "a fundamental support of people who work hard for low wages." 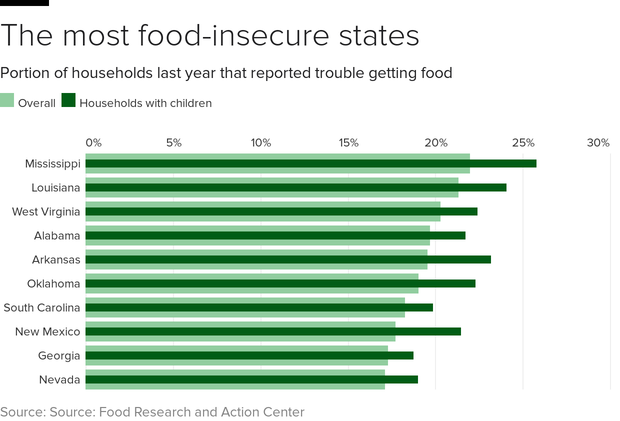 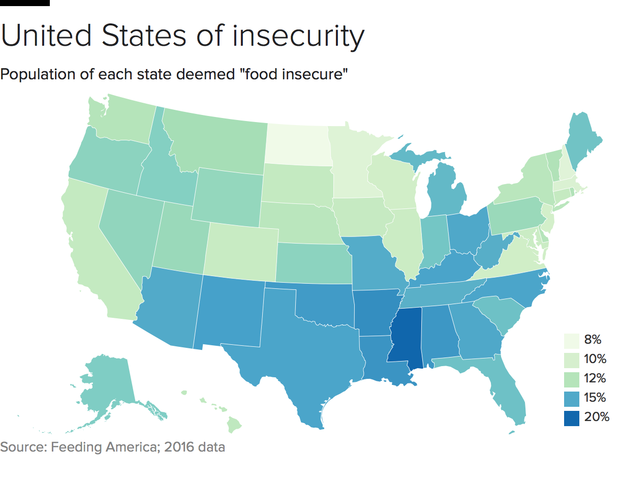 Biden enters office with one of the worst economies in U.S. history