As Tesla struggles with the blowback from its surprising, and quickly retracted, proposal to go private, some investors are asking what was once unthinkable: Is it time to remove founder Elon Musk from the CEO spot?

Shareholders, who have historically backed Musk's eccentricities, aren't happy with the fallout from the poorly conceived plan. Tesla on Tuesday got hit with a sixth shareholder lawsuit over Musk's tweets. And the Securities and Exchange Commission is investigating, a process that could go on for years.

"I give him credit for moving the [car] industry toward full electrification in a way that would not have happened if Tesla was not there," said CFRA analyst Efraim Levy. "But there's also the neuroticism, the unfiltered part."

In that, Musk is similar to many founding CEOs. While entrepreneurs are great at imagining new products and turning them into reality, they're less effective at following the capitalist dictates of corporate governance. Musk is often hostile to analysts and journalists, seems to tweet before thinking and displays a shocking candor in media profiles. He currently seems to be the opposite of an effective corporate leader.

His actions have even drawn comparisons with Uber founder Travis Kalanick, who similarly courted controversy and was replaced last year by Dara Khosrowshahi.

"Founders' attachment, overconfidence, and naïveté may be necessary to get new ventures up and running, but these emotions later create problems," business professor Noam Wasserman wrote in the Harvard Business Review. His research, first published in 2008, found that more than 75 percent of founders were replaced as CEO by the time their company went public. About the same portion resisted that change.

As Tesla shifts from innovating on technology to shipping a mass-market car in huge quantities, that moment may be near.

"The key question is whether [Tesla] investors will continue to support a CEO who may potentially be involved in market manipulation and/or securities fraud as well as a company under SEC investigation," the Cowen analysts wrote. Musk's series of tweets raises questions of "whether Elon's behavior, management style, and operational ability are enough to take Tesla to the next level," the note said.

Still, the concept that Musk might be replaced soon seems unlikely. Tesla's board reaffirmed its support of the CEO in a statement, and no replacement appears to be in the wings. Even though Musk's pay agreement with Tesla allows for him to step down as CEO while remaining involved in the product, analysts agree that it would look terrible.

"Anything hindering Elon's involvement with the company, I think, would hurt the retail investor, since it hurts the mystique of the company," said Cowan analyst Jeffrey Osborne. CFRA's Levy, who lowered Tesla's target share price this week, nonetheless said he expected Musk to remain CEO, given "the unique investor support TSLA and Elon Musk receive."

What many are calling for, however, is a No. 2 to Musk: A chief operating officer or other operationally minded leader who could steer Tesla and free Musk to concentrate on big-picture strategies. Musk has such a leader at SpaceX in the form of the company's president and COO, Gwynne Shotwell. Having a counterpart at Tesla would take some pressure off Musk.

But some question how long a COO could last given Musk's famously micromanaging style and hard-driving, sleeping-on-the-factory-floor tendencies.

"To me, it would be like being chief of staff in the Trump White House," CFRA's Levy said. "It doesn't have the full power that normally comes with the position."

Tesla's board has said it fully supports Musk and told The Washington Post it's not actively searching for a day-to-day operations head. Wall Street seems to agree that any movement on that front would need to come from Musk himself — and there hasn't been any active movement on that front.

In the interim, Musk won't lack for advice on how to relieve some of the pressure. Wellness guru Arianna Huffington urged him recently to sleep more. Musk countered that working less than his 120-hour week is not an option. 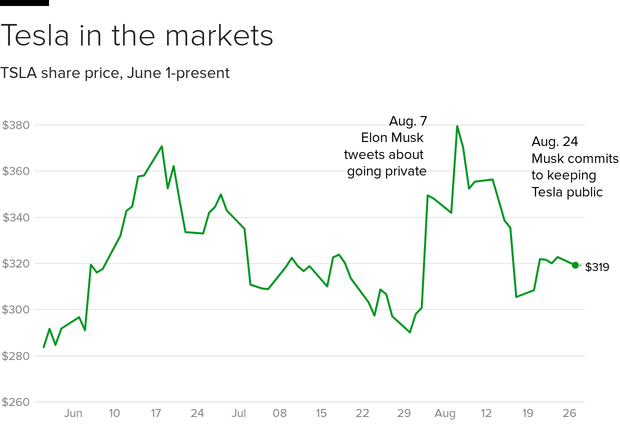 Opportunity in America, 10 years after the financial crisis