By Aimee Picchi MoneyWatch August 28, 2018, 3:00 AM Almost half of Americans can't pay for their basic needs

Four in 10 Americans are struggling to pay for their basic needs such as groceries or housing, a problem even middle-class households confront, according to a new study from the Urban Institute.

Despite the U.S. economy being near full employment, 39.4 percent of adults between 18 and 64 years old said they experienced at least one type of material hardship in 2017, according to the study, which surveyed more than 7,500 adults about whether they had trouble paying for housing, utilities, food or health care.

The findings surprised researchers at the Urban Institute, who had expected to find high levels of hardship among poor Americans but hadn't predicted so many middle-class families would also struggle to meet their basic needs. That may illustrate that a middle-class income "is no guarantee" of protection from hardship, said Michael Karpman, research associate at the Urban Institute's health Policy Center and a co-author of the report.

Against the backdrop of President Donald Trump's boasting about low unemployment and strong economic growth, the research adds nuance to the problems facing American families. Middle-class households tend to struggle with paying their health care bills rather than utilities, for instance. Health care costs have outpaced wages and inflation, pushing more Americans into high-deductible plans, which can backfire when serious health problems arise.

"A lot of people are looking at the fact that wages aren't keeping up with household costs as one reason families are having difficulty making ends meet," Karpman said. "Even for families with health insurance, they may be facing high deductibles that leave them facing high costs."

The Urban Institute designed the study last year to get a baseline measure of hardship in anticipation of proposed cutbacks in federal safety-net programs, such as proposals to add work requirements to food stamps and Medicaid. Some states have already moved forward with such plans, such as Maine's work requirement for its food stamp recipients.

The idea, Karpman said, is to return to the survey each year to measure how hardship is changing as federal and state policies cut back on support for low-income families.

"We expect it'll increase the risk that families won't be able to meet their basic needs," he said.

Low-income households reported the highest share of hardship. For instance, more than 40 percent of poor and near-poor adults, or those below and slightly above the federal poverty level, experienced food insecurity, compared with about 23 percent across all income groups.

Holding a job also doesn't provide immunity to hardship, the study found. One of three families with at least one working adult said they had trouble meeting at least one basic need, such as paying for food or utilities.

Certain groups are more likely to experience material hardship than others, the study found.

Almost 60 percent of Americans with multiple chronic medical conditions experienced material hardship in 2017, compared with about 33 percent of adults without any chronic illnesses, they found.

Educational attainment was also tied to hardship. The researchers found that 56 percent of Americans with less than a high school degree struggled to meet their basic needs. By comparison, just 24 percent of college grads experienced hardship.

"I hope that people will see," said Karpman, "that even though we're in a relatively healthy economy, a lot of families are still having difficulty meeting their basic needs for food, housing and health care." 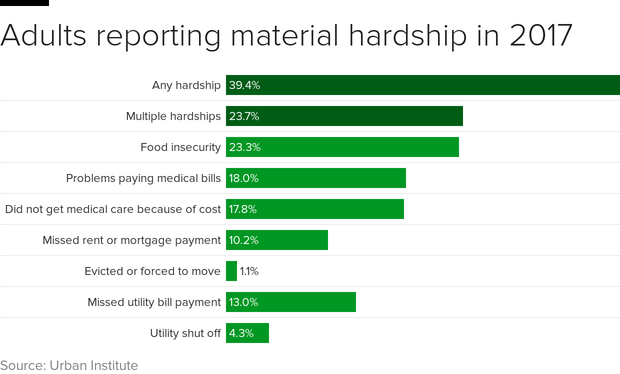