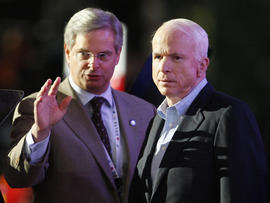 Political strategist Rick Davis, who was one of Senator John McCain's closest confidants, served as national campaign manager both times the Arizona Republican ran for president. Appearing on "CBS This Morning" on Monday, Davis described his years with McCain as "the greatest, wildest adventure."

Davis was with the McCain family this past weekend when the 81-year-old senator died of brain cancer. He said he was proud to be counted as family, by being allowed to be with McCain in his final days.

"We've been together almost since these kids were born, and to have spent a lot of time over the last six months in and out of their beautiful place in Sedona with the family, with Cindy and the kids, was probably the greatest opportunity of my life, to sort of see closure with what has been the greatest, wildest adventure, I think, in anybody's history. It was really wonderful to be included. I really appreciated it, as heartbreaking as it was, I can't imagine wanting to be anywhere else."

Tributes to McCain poured in from around the country and the world this weekend, honoring the war hero and maverick statesman.

"I don't think I've ever seen a Sunday, you know, where there was only one report and that was all about John McCain. He would have loved that!" Davis said. "He loved the media. He felt really strongly about having total access to all of you. And as a political strategist for him for over 20 years, that was a nightmare for me most of the time! But he would have loved it."

Davis continued, "It was just glorifying, around the world, every media outlet and every country and every capital spent the day talking about John McCain. That was really a special thing."

Co-host Anthony Mason asked, "One of his colleagues said yesterday we're losing John McCain right when we need him the most, which may account for the extraordinary outpouring of affection from both sides [of the aisle]. And you get the sense John McCain was kind of aware of that in his last year. Did you get that sense?"

"Yeah, I mean, a lot of John's life was spent in the arena," Davis replied. "He was the man in the arena; he loved it. The harder it was, the better he liked it. And I think it was a bit of a bittersweet situation for him for the last six months. He was in a beautiful place surrounded by his family, fighting cancer, and every day wishing he was in the well of that Senate trying to make America a better place."

"Senator McCain requested both former Presidents Barack Obama and George W. Bush speak at and deliver eulogies at his funeral," said co-host Norah O'Donnell. "These were the two men that kept him from the presidency. Why did he want them to eulogize him?"

"I think it's a very practical thing," Davis said. "His life story is, even in defeat he found ways to working with people like George Bush and Barack Obama. And in a world that has turned red and blue and nothing in between, even as he planned his own funeral he felt very strongly that he wanted to have these two individuals that he grew to respect and work with closely to try to accomplish important things for the count and the world, to be present at his funeral."

"The family's decision not to include President Trump at the funeral, too, also says something, does it not?" asked co-host Gayle King.

"Well, we really want to focus on the positive aspects of John's life, and I would prefer not to get into any of that at this point," Davis replied. 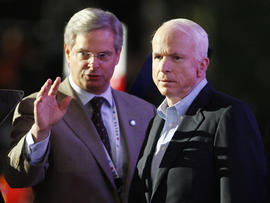