By Anthony Mirhaydari MoneyWatch August 27, 2018, 5:15 AM Why the Fed's Powell is resisting Trump's rate hike pressure

Federal Reserve chairman Jerome Powell is pushing back against President Trump's recent criticism of the central bank's ongoing rate hike campaign, saying policymakers would do "whatever it takes" to contain inflation.

Powell, who spoke Friday at the Jackson Hole central bank symposium, invoked a phrase made popular by European Central Bank chief Mario Draghi in 2012, when the region was in the darkest days of the Eurozone debt crisis. To be sure, Powell has been upbeat about the U.S. economy, and he also said that there isn't yet clear evidence of accelerating inflation — meaning that even higher interest rates would well be on the horizon.

Trump has been critical of the Fed's recent monetary tightening, which has helped push the U.S. dollar higher. That marks a reversal from his campaign trail criticisms of ultra-loose monetary policy under Powell's predecessors. While Powell acknowledged there remain risk factors threatening the economy that could demand a different policy response, he said he wanted to "step back from these" and focus on the positives.

This is yet another sign that the Fed under Powell is shedding its post-crisis focus on the downside, evidenced not only by his comments but by the most recent Fed meeting minutes, which upgraded their assessment of economic activity from "solid" to "strong." This is high praise.

In his speech, Powell highlighted the tight labor market, noting that the unemployment rate has fallen steadily for nine years. At just 3.9 percent, the rate is near a 20-year low. "Most people who want jobs can find them," he said.

Powell also spent considerable time exploring the causes of the "Great Inflation" that started in the 1960s and ended in the early 1980s, only after interest rates were pushed above 20 percent. One culprit: the labor market was tighter than the Fed estimated at the time, resulting in inflation expectations becoming "unanchored."

While Trump believes the Fed should be holding off on rate hikes, others such as Gluskin Sheff economist David Rosenberg believes the Fed is repeating the mistakes of the 1960s by holding interest rates too low far too long into the current expansion. In fact, when adjusted for inflation, policy rates are actually in negative territory. In the midst of the longest bull market in history.

Powell defends the current strategy of gradual rate hikes, arguing that the Fed is on the right track because consumer expectations for long-term inflation remain stable. Wall Street, for its part, believes the Fed will slow its rate hike pace starting in 2019, as evidenced by the disconnect between the Fed's own interest rate expectations and those being set in the futures market.

As for Trump, the team at Capital Economics recently wrote that he "knows he can't really influence Fed policy" given the central bank's Congressional mandate and independence from the White House. Powell's term runs through February 2022 — when a new president could very well be sitting in the Oval Office.

Instead, the economists believe he is setting up the Fed to take the blame in the event of a future economic downturn. 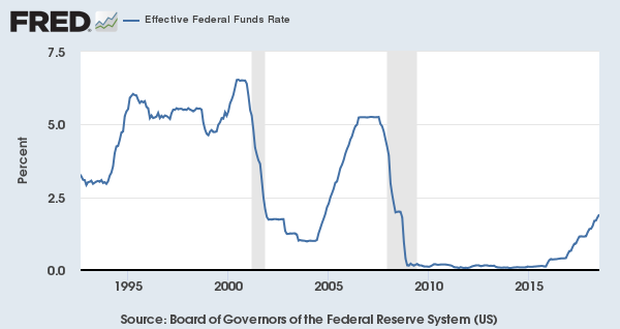