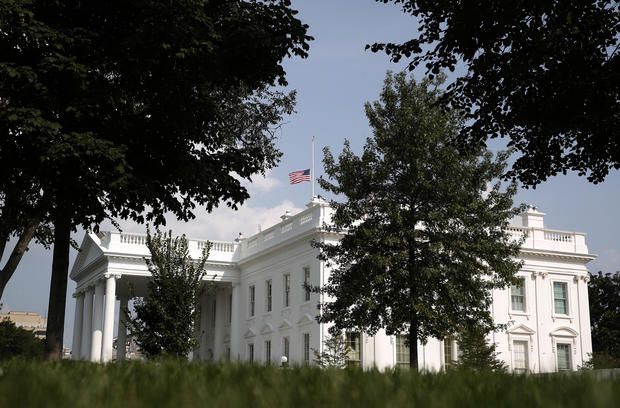 Late Monday afternoon, the flag flying at the White House was lowered to half-staff to honor the late Sen. John McCain. It had been lowered to half-staff Sunday but then raised again on Monday morning, even as the nation continued honoring McCain's life and legacy. The American Legion was among those who criticized the White House lapse and urged that the flag be lowered. The Arizona Republican, whose relationship with President Trump has long been fraught, died Saturday at the age of 81 after battling brain cancer.

In a statement issued Monday afternoon by the White House, the president said:

"Despite our differences on policy and politics, I respect Senator John McCain's service to our country and, in his honor, have signed a proclamation to fly the flag of the United States at half-staff until the day of his interment.

I have asked Vice President Mike Pence to offer an address at the ceremony honoring Senator McCain at the United States Capitol this Friday.

At the request of the McCain family, I have also authorized military transportation of Senator McCain's remains from Arizona to Washington, D.C., military pallbearers and band support, and a horse and caisson transport during the service at the United States Naval Academy.

Finally, I have asked General John Kelly, Secretary James Mattis, and Ambassador John Bolton to represent my Administration at his services."

During several events open to cameras Monday, Mr. Trump did not answer shouted questions from reporters about his response to McCain's death.

While the White House originally lowered the flag late Saturday evening, White House reporters, including CBS News' Mark Knoller, noticed that the flag was back at full-staff Monday morning:

Mr. Trump did not issue a formal proclamation on McCain's death until Monday afternoon. Typical practice is for flags to remain at half-staff through the day of interment. McCain's final resting service will take place Sunday at the U.S. Naval Academy in Annapolis, Maryland. But while the practice is typical, federal code demands only that for a member of Congress, the flag should be flown at half-staff "on the day of death and following day."

For an associate justice of the Supreme Court, secretary of executive or military department, former vice president, or governor, the prescribed time is from "the day of death until interment." The death of a vice president, chief justice, former chief justice or House speaker merits 10 days, and for a president or former president, the flag flies at half-staff for 30 days.

President Obama, who saw Sens. Ted Kennedy, D-Massachusetts; Robert Byrd, D-West Virginia; and Daniel Inouye, D-Hawaii, die during his presidency, proclaimed that flags should fly at half-staff for these senators until they were buried.

In McCain's case, before the flag was lowered again, the American Legion issued a statement urging the president to do so in keeping with "long-established protocol." The veterans organization said:

"Mr. President, just this year, you released presidential proclamations noting the deaths of Barbara Bush and Billy Graham. Senator John McCain was an American hero and cherished member of The American Legion. As I'm certain you are aware, he served five and a half years as a prisoner of war in North Vietnam and retired from the U.S. Navy at the rank of Captain. He then served in the U.S. Congress for more than three decades.

On the behalf of The American Legion's two million wartime veterans, I strongly urge you to make an appropriate presidential proclamation noting Senator McCain's death and legacy of service to our nation, and that our nation's flag be half-staffed through his internment."

Meanwhile, governors from Ohio Republican John Kasich to New York Democrat Andrew Cuomo ordered that public flags in their respective states remain at half-staff to honor McCain. According to Sen. Chuck Schumer's spokesperson, Schumer and Senate Majority Leader Mitch McConnell also requested the Department of Defense to "provide necessary support so that U.S. flags on all government buildings remain at half mast through sunset" on the day of McCain's interment.

He will then lie in state Friday at the U.S. Capitol, with another service taking place in Washington on Saturday, where former Presidents George W. Bush and Barack Obama are expected to speak. 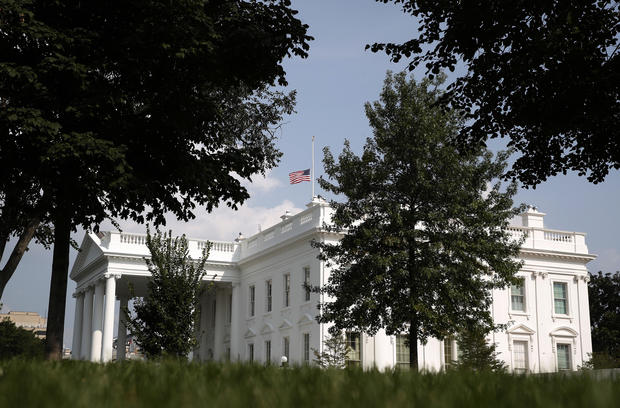 14 injured after shooting at bar in Austin, Texas

Officials try to reassure Tokyo Olympics will be held this summer

Mayor proposes restrictions on protests if groups have history of violence