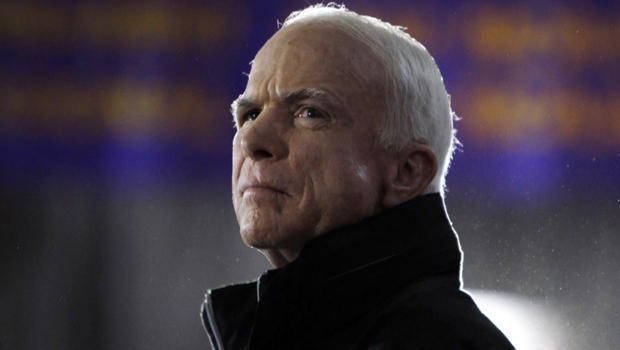 He was, truly, one of a kind. Chip Reid looks back on the remarkable life and times of Senator John McCain:

"I've been an imperfect servant of my country for many years. But I've been a servant first, last, and always."

He was called a maverick. ("If you want the status quo in Washington, do not support John McCain," he said while campaigning in 1999.) He was an American hero ("What the Vietnam experience did for me was crystallize the importance of doing what's right.") And, as a military man and statesman, by most any standard, Arizona Senator John McCain was a man of courage and ideals.

But last summer, McCain began another fight – a personal struggle he took public when he voted against the Republican health care bill. It was the latest example of John McCain voting his conscience even if it meant bucking his own party.

"I was raised in the concept and belief that duty, honor, country is the lodestar for the behavior that we have to exhibit every single day," he said.

Born in 1936, John Sidney McCain III was the son and grandson of four-star Navy admirals. And the "maverick" in him came out early. "I was very rebellious," he told "Sunday Morning" in 1999. "I was a person who didn't conform to the rules and regulations of either high school or the Naval Academy."

Nevertheless, he volunteered for combat duty during the Vietnam War. In October 1967, as a Navy pilot flying his 23rd bombing mission over North Vietnam, his plane was shot down. "It was hit by either missile or anti-aircraft fire, I'm not sure which. And the plane continued straight down, and I ejected, and broke my leg and both arms," he said on camera from his prison cell.

Severely injured, McCain was captured and held at the so-called "Hanoi Hilton," the infamous prison known for its brutality. After about a year, he was offered early release because of his family connections, but McCain refused to leave his fellow POWs behind..

He languished in captivity for a total of five-and-a-half-years. He withstood frequent beatings and torture, leaving his arms with permanent damage.

"In many ways it was the most uplifting experience in my life, because I was privileged to serve in the company of heroes," he said.

In 1982, after he retired from the military, he took his fighting spirit to Washington, as a United States Congressman. He went on to be elected six times to the Senate, where he stood out for his "straight talk," especially on subjects like campaign finance.

"If the special interests continue to play a greater and greater role in the formulation of legislation, then we will see a breakdown of democracy as we know it, and I'm not exaggerating!" McCain said.

But in the late 1980s, McCain himself, along with four other senators, was accused of exerting improper influence on regulators who were investigating allegations of savings and loan fraud against financier Charles Keating. McCain was never disciplined.

He ran for president twice – first in 2000, and then in 2008, when he won the Republican nomination to run against Democratic Senator Barack Obama. ("It is because I owe America more than she has ever owed me that I am a candidate for president of the United States," he said.)

During that historic 2008 campaign, which at times was racially charged, McCain's sense of right and wrong was on display. When a woman in the audience criticized Barack Obama and called him an Arab, McCain calmly corrected her, "No, Ma`am. He`s a decent family man, citizen, that I just happen to have disagreements with."

Though he led the ticket, McCain's campaign may be best remembered for his controversial choice of running mate: Alaska Governor Sarah Palin.

McCain was defeated, with Obama winning twice as many electoral college votes. During his concession speech, McCain asked his audience to refrain from booing when he said, "I had the honor of calling Senator Barack Obama to congratulate him on being elected the next president of the country that we both love."

He returned to the Senate, where he led the Armed Services Committee. But in 2015, he would find himself in the crosshairs of then-Republican presidential candidate Donald Trump, who said of the veteran, "He's not a war hero. He is a war hero because he was captured; I like people that weren't captured, I hate to tell you."

A year later, McCain withdrew his endorsement of Trump after audio emerged of the candidate bragging about groping women.

The strain between the two Republicans continued after President Trump took office, when Senator McCain was blunt with his criticism. Speaking at the International Republican Institute in May 2017, McCain said, "I think we have seen this movie before. I think it`s reaching the point where it`s of Watergate-size and scale, and a couple of other scandals that you and I have seen. It`s the centipede that the shoe continues to drop."

Last summer, when the senator's health issues became public, the outpouring of respect and admiration overflowed the aisles.

McCain told "60 Minutes," "I got very choked up. And then, of course, you know, all of them coming over and giving me a hug. It was deeply moving. I had never seen anything like that."

To the end, John McCain faced cancer as he had any adversity – with strength, integrity, and gratitude.

"I want, when I leave, that the ceremony is at the Naval Academy and we just have a couple of people that stand up and say, 'This guy, he served his country.'" 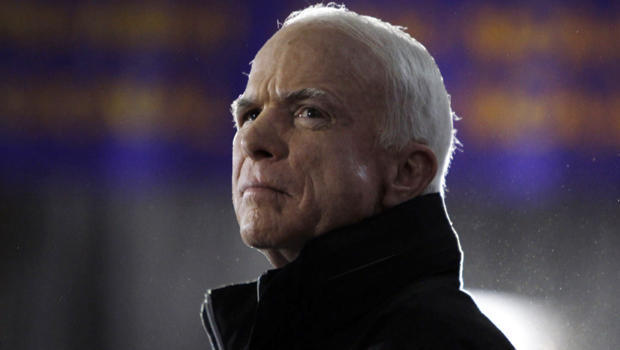