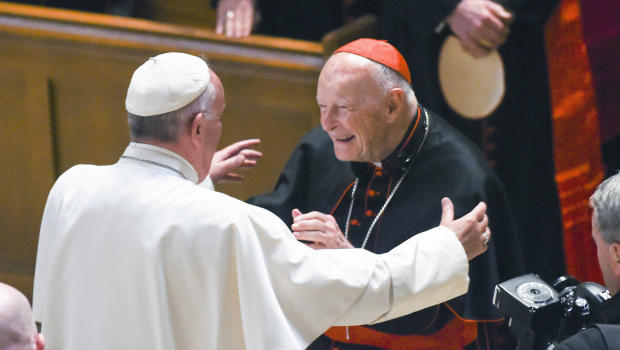 A former Vatican ambassador to the U.S. said Sunday that he told Pope Francis in 2013 about allegations of sexual abuse against a prominent priest — and that Francis took no action. Now, the former official, Archbishop Carlo Maria Vigano, is calling for Francis to step down.

Vigano made the claims in a lengthy statement that concludes with a call for Francis' resignation: "In this extremely dramatic moment for the universal Church, he must acknowledge his mistakes and, in keeping with the proclaimed principle of zero tolerance, Pope Francis must be the first to set a good example to Cardinals and Bishops who covered up McCarrick's abuses and resign along with all of them," he writes.

Vigano, who retired in 2016 at age 75, described an exchange with Francis on June 23, 2013, shortly after he became pope, about Cardinal Theodore McCarrick, the former archbishop of Washington, D.C., who resigned last month over claims he sexually abused seminary students and an altar boy.

Vigano writes that he told Francis about the allegations: "HolyFather, I don't know if you know Cardinal McCarrick, but if you ask the Congregation for Bishops there is a dossier this thick about him. He corrupted generations of seminarians and priests and Pope Benedict ordered him to withdraw to a life of prayer and penance."

Vigano writes the pope did not respond to the statement, and McCarrick continued in his role as a public figure for the church.

"Pope Francis has repeatedly asked for total transparency in the Church," Vigano continues. "He must honestly state when he first learned about the crimes committed by McCarrick, who abused his authority with seminarians and priests. In any case, the Pope learned about it from me on June 23, 2013 and continued to cover him."

Pope Francis addressed the sex abuse scandal on Saturday in comments made in Dublin. "The failure of ecclesiastical authorities — bishops, religious superiors, priests and others — to adequately address these repugnant crimes has rightly given rise to outrage, and remains a source of pain and shame for the Catholic community," he said. "I myself share these sentiments."

Father Boniface Ramsey of New York told CBS News this month that he repeatedly complained about McCarrick and heard about his disturbing behavior as early as 1986.

This month, a Pennsylvania grand jury issued a report that said more than 300 priests abused more than 1,000 children, and likely thousands more, over seven decades.

Nearly 100 of the accused clergy are from the Pittsburgh diocese alone, where Donald Wuerl, the current cardinal of Washington, D.C., was the bishop for 18 years.

In his statement, Vigano wrote that Wuerl also knew about McCarrick. "His recent statements that he knew nothing about it … are absolutely laughable. The cardinal lies shamelessly," Vigano wrote.

In an interview with CBS News correspondent Nikki Battiste before the grand jury report, Wuerl said that he was quick to deal with allegations and that he was not aware of any rumors about McCarrick.

"If there were allegations, we dealt with them immediately," he said. "All the time that [McCarrick] was here and certainly all the time that I've been here, there was never any news. If I could tell you no one ever came to me and said this person did this to me. No one. No one. And remember, we were just talking about Pittsburgh. I was in Pittsburgh…we weren't following the rumors of different parts of the country."

Wuerl also suggested to CBS News that McCarrick had paid a price for his actions. "He has resigned and his resignation has been accepted. And he's been told to stay in seclusion…that's a pretty substantial penalty to be paying."

Vigano's statement calls on the church to take action. "To restore the beauty of holiness to the face of the Bride of Christ — so tremendously disfigured by so many abominable crimes, if we truly want to free the Church from the fetid swamp into which she has fallen, we must have the courage to tear down the culture of secrecy and publicly confess the truths that we have kept hidden." 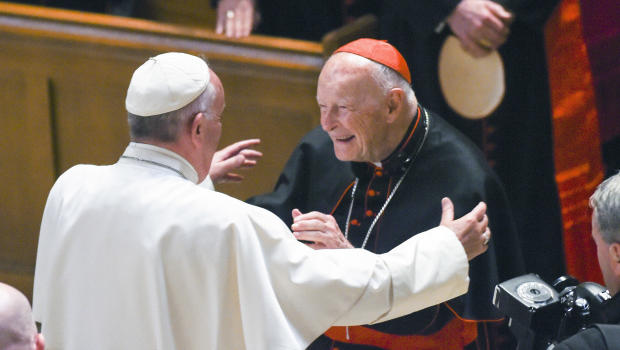 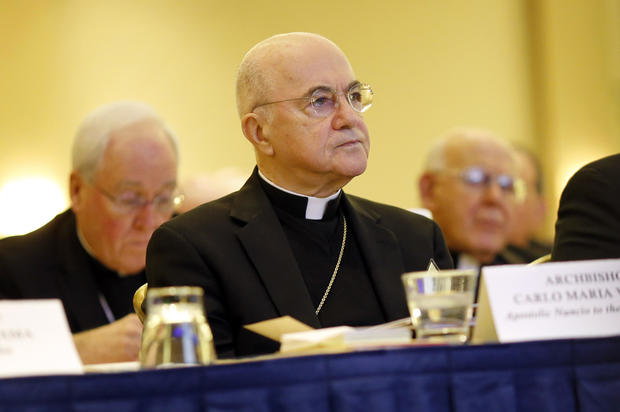 Israel and Hamas both threaten escalation as Mideast reignites