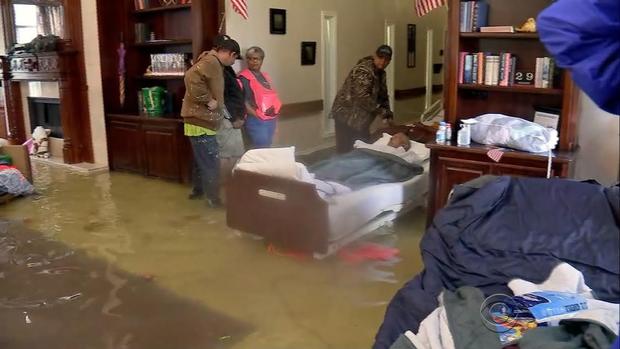 The preliminary results shared exclusively with CBS News, reveal that air quality in flooded homes matched the outdoor pollution of some of the world's most contaminated cities such as Mumbai and Beijing.

"I wasn't expecting them [air pollution levels] to be that high," said Memo Cedeño Laurent, a research associate at the Harvard T.H. Chan School of Public Health. "On a blind basis, we can tell what house flooded and what house didn't flood just because the differences in the levels are so stark."

Harvard's study uses a network of environmental sensors aimed at monitoring 30 homes that were flooded and 30 that were not, which are located throughout Houston. Neighborhoods with sensors include Kashmere Gardens and Memorial. Sensors track each home's indoor air quality to check for minute amounts of toxins invisible to the naked eye, which flood waters may have left behind.

Many of the flood victims participating in the study are still living in their homes while they are being rebuilt since they do not have other long-term housing options.

According to Laurent, a lack of indoor ventilation and the prolonged exposure to known pollutants such as mildew, mold or particulate matter from construction debris, can lead to a more toxic environment inside a home than breathing the air outdoors.

"People think that problems finish once the water goes away, but that's when they start for many people." Laurent said.

The most dangerous pollutants are fine airborne particles of less than 2.5 microns in diameter known as PM2.5. These tiny particles can find their way deep into the lungs and cause serious health problems, including asthma, strokes, lung cancer and heart attacks.

According to the World Health Organization, PM2.5 levels above 25 are considered unsafe.

Harvard's preliminary results recorded PM2.5 measurements as high as 400 in flooded homes. The average was 59, comparable to a very bad pollution day in a city like Mumbai or Beijing. Homes in the study that did not flood, however, recorded average PM2.5 levels at 1.8.

"My baby is too small to be snoring," Kinney said. "That's when they [doctors] were like, 'well, your two little children have asthma.'"

Gina McCarthy, former EPA administrator in the Obama administration and now director of Harvard's C-CHANGE Center for Climate, Health and the Global Environment, warns about the unknown public health challenges that exist after a flood and how long term exposure can escalate health risks.

"I don't think people realize just how much of our world is indoors," McCarthy said. "They think that if there is an air pollution outside they'll just go inside, as if we have bottled air inside."

The Harvard study is ongoing, with final results expected next spring.

"What is clear is something is dramatically different in flooded homes," he said. "We cannot assess the full impact until the study is complete."

City of Houston officials estimate more than 300,000 homes were impacted by the flood. As they grapple to rebuild after Harvey, most recovery measures focus on flood mitigation, infrastructure, improving building codes, and buying out homes located too deep in the flood plain to be protected, not indoor air quality.

City leaders point to a new Hurricane Harvey Registry, launched in April, which is the first of its kind to collect information about environmental exposures after a major flooding event. Modeled after the World Trade Center Health Registry for people exposed to fire and smoke in New York City on Sept. 11, 2001, it is designed to measure the health effects victims experienced during and after the storm.

In July, the Centers for Disease Control and Prevention granted $6.1 million to the Houston Health Department for a variety of projects, including environmental health, measuring invasive mold, and respiratory disease surveillance. City officials expect the findings to improve the city's response to the next natural disaster.

"We've been put on notice," Houston Mayor Sylvester Turner told CBS News. "We can't continue to build the same way recognizing what is going to occur. We are changing our building codes, our standards, to build a city that's more resilient." 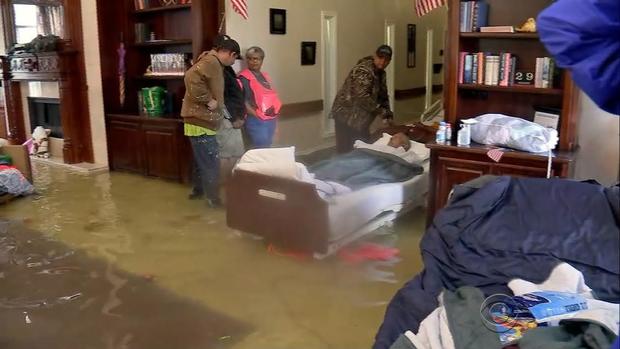 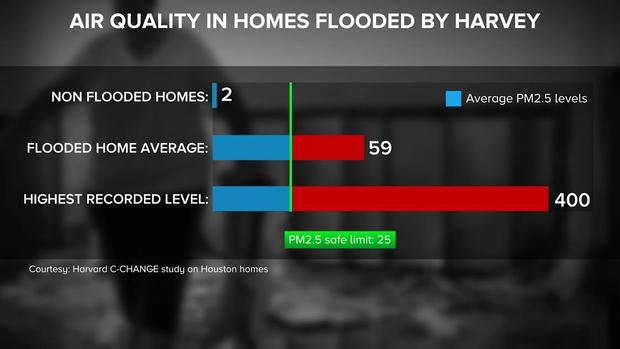 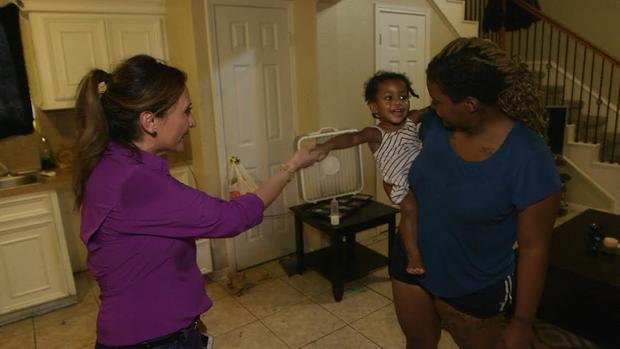 Saturday Sessions: Texas performs “You Can Call Me”

Some patients in a Louisiana COVID unit refuse to get vaccinated

Pro surfer on his journey to the Tokyo Olympics

Trump claims crowd at January 6 rally before Capitol assault was...

Delta variant now accounts for more than 80% of COVID cases