HONOLULU — Hurricane Lane was downgraded to a Category 3 Thursday, but the storm's slow motion threatened Hawaii with days of rain. Parts of the Big Island were soaked with more than a foot of rain Thursday.

Forecasters say Lane's current track has the storm coming "perilously close" the main Hawaiian Islands Thursday into Friday as a hurricane. In addition to downpours, the hurricane is pushing up wave heights and could mean strong winds, CBS Honolulu affiliate KGMB reports

Forecasters said Lane's eye passed over a buoy about 250 miles southwest of the Big Island on Thursday morning, and a peak wind speed of 107 mph was recorded,.

"Regardless of the exact track, life-threatening impacts are likely over many areas as this strong hurricane makes its closest approach," the Central Pacific Hurricane Center said.

As of 2 p.m. local time, Lane was located about 190 miles south-southwest of Kailua-Kona on the Big Island, and about 200 miles south of Honolulu. Maximum sustained winds were recorded at 125 mph, making it a powerful Category 3 storm.

"Lane, while it's been downgraded, is wide and very moist and it's going to hang around for a while," said Honolulu mayor Kirk Caldwell.

Hawaii's last direct hit happened in 1992 with Hurricane Iniki, causing $3 billion in damage. The Big Island is already reeling from months of devastating lava flows from the Kilauea volcano. For an island that just can't seem to catch a break, those eruptions have died down just as waters start to rise.

Authorities said Thursday two campers are trapped in a Hawaii valley that has been hit by heavy rain from an approaching hurricane.

He said emergency workers haven't been able to contact them since then because of poor cellphone reception.

He said it's not safe for emergency crews to search for them because of landslides and rivers of rain blocking roads.

Dangerous, heavy rains and flooding are occurring in east Hawaii as Lane slows down.

Okabe says there are also reports of boulders falling in a Hilo park. 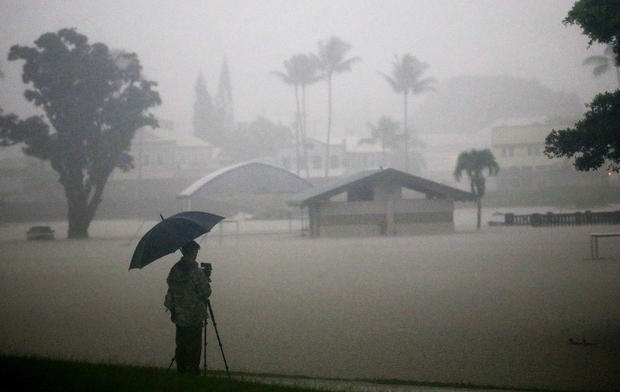 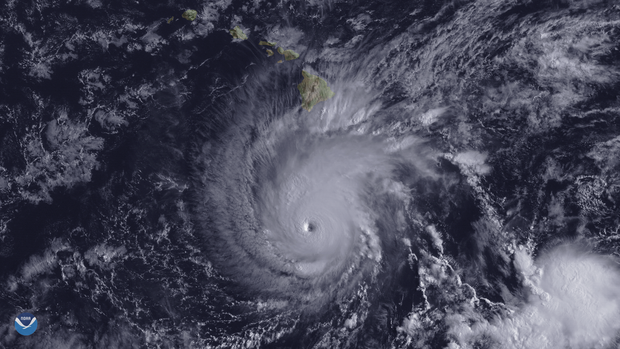