By Irina Ivanova MoneyWatch August 24, 2018, 5:45 AM Why Trump's coal reprieve is unlikely to revive the industry

The Trump administration's rollback of the Clean Power Plan will increase the amount of carbon dioxide in the air and cause 1,400 premature deaths every year. What it's unlikely to do is stop the coal industry's precipitous economic decline, economists say.

More than 200 coal plants have closed since the Great Recession, victims of economics as much as regulation, they say. The availability of cheap natural gas, fueled largely by the fracking boom, has made it harder for coal plants to compete.

The Clean Power Plan, which was first proposed in 2014, did have a marginal effect on coal plant retirements, said Scott Edwards, policy lead at the environmental group Food and Water Watch.

"The CPP really did force some level of fuel-switching to renewables, because there was no way to meet the emissions reduction goals without shifting to renewables. That incentive is gone," he said.

This year, the U.S. is set to build two new coal plants — the first since 2015, according to CoalSwarm. But analysts say deregulation won't boost that number, partly because running a coal plant running is increasingly unprofitable in many parts of the country. It's likely that more plants would close if they didn't enjoy utility regulation guarantees they will make more than their costs.

"Coal plants are not nearly as competitive as people thought they were going to be," said John Larsen, director at the Rhodium Group.

More than one-quarter of the nation's coal capacity is projected to shut down in the next 12 years, even assuming "the most favorable market dynamics for coal," the Rhodium Group's U.S. Climate Service said in a client note. If natural gas stays as cheap as it is today, half of the coal fleet could be gone by 2030, they predict.

The natural gas boom has coincided with technological innovations that drive down the cost of wind and solar energy.

"Three or four years ago, the level of expectations on wind and solar, their cost, how cheap they might get, was not fully understood," said Rhodium Group's Larsen. Since then, "gas prices have stayed relatively cheap, and renewable costs have come down."

Today, the main competitors to coal — natural gas, wind and solar power — are more competitive with each other than with coal. The cost of wind turbines has declined by one-third in the last decade, according to the Department of Energy, while the price of new solar installations has witnessed a similar drop.

Large-scale power buyers, especially tech companies like Google, Facebook and Apple, are often willing to pay a small premium for clean energy. In the first half of this year, corporations had purchased more renewable power than they did in all of 2017, according to Bloomberg.

However, a power plant's financing often depends on local circumstances. Now that the EPA's has effectively declined to price carbon, it means that local differences will be exacerbated, said Katie Bays, an analyst with Height LLC.

"The amount of uncertainty that this rule creates… makes it impossible to model a carbon price in any way," Bays said.

"In environments where regulators see specific value in investment in and of itself, you'll continue to see large investments [in renewables]. In large parts of this country, that's not the case," she said.

Two recent examples highlight such local differences. A Colorado utility, Xcel Energy, is aiming to close a coal-fired power plant and replace it with a solar farm — at a lower price to its customer, the steel company Evraz. But in nearby Oklahoma, a planned wind farm intended to be the largest in the U.S. was canceled in part because of cost. (Administrative filings for the farm, called the Wind Catcher project, detail regulators' unwillingness to compete with fossil fuels at a time when federal deregulation reduced the economic benefits of the wind farm.)

Some of those states are now cheering the rollback of the CPP. But even in six months, others have progressed. New Jersey has just announced its own ambitious clean-power plan. And utilities in Wisconsin, Iowa and Kansas recently increased their clean-energy goals.

The states' progress in reducing carbon emissions even without the Clean Power Plan highlights an early criticism of the regulation: It does not go far enough. That's a point that's likely to resurface in legal challenges to its replacement.

"The big argument against CPP was that it was an overreach," said Edwards of Food and Water Watch. "What you'll see in challenges to this rule is that EPA didn't go as far as they're required to do by law." 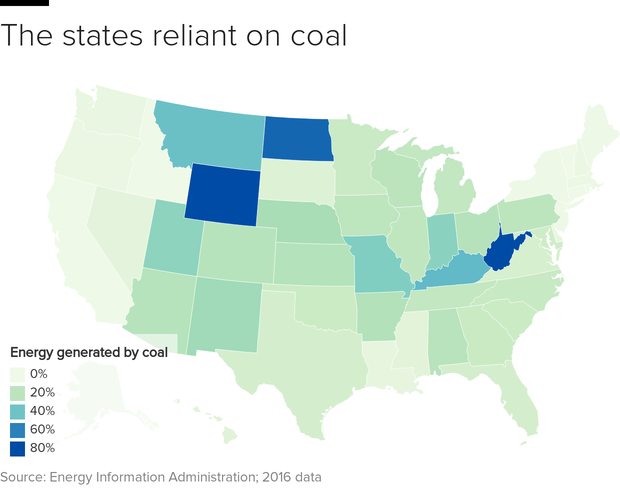 Trump’s Fed pick Stephen Moore faces scrutiny — and not only...