Kalashnikov, maker of the AK-47 assault rifle, is joining the throng of companies looking to compete with Elon Musk's electric car company, Tesla.

The Russian firearms manufacturer this week unveiled its powder-blue, retro-style electric car prototype, called the CV-1, at a weapons exhibition near Moscow. The vehicle, inspired by a Soviet hatchback created in the 1970s, will be able to travel 217 miles on one charge and reach 62 miles an hour in six seconds, according to Kalashnikov's website. For now, no price has been set.

Russian inventor Mikhail Kalashnikov created the AK-47 in 1947. The assault rifle has been used in armed conflicts around the globe. Today the company sells three brands of weapons — one for combat, one for civilian uses and another for sport shooting — as well as other weapons and projectiles.

Closer to its roots as one of the world's leading makers of assault rifles, Kalashnikov at the same time debuted a 13-foot tall combat robot dubbed "Little Igor." That drew ridicule on social media, with some posters mocking what they viewed as the robot's outdated appearance.

One manipulated image showed Russian opposition leader Alexei Nalalny in the arms of the bulky robot.

To test a rocket earlier this year, Musk propelled his roadster into space. With that in mind, some created photos of Kalashnikov's clunky concept car joining the Musk vehicle in orbit. 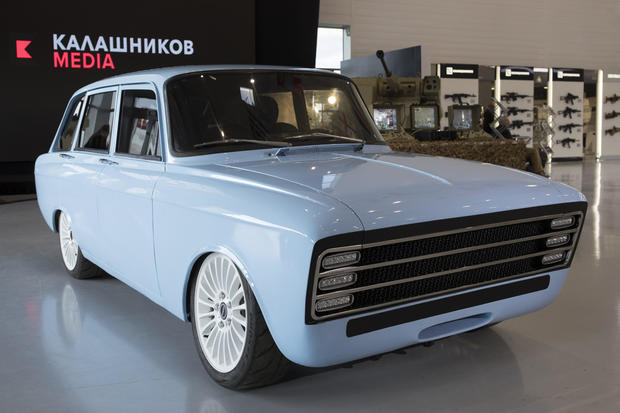