Billionaire Democratic donor Tom Steyer on Thursday blamed the "Washington establishment" for failing to seriously pursue impeaching President Trump, an initiative he has been pressing Congress on for months.

Steyer, in an interview with CBSN, claimed there was already enough reason to impeach the president before Tuesday, when President Trump's personal attorney pleaded guilty to federal crimes and his former campaign chairman was found guilty of eight counts related to financial fraud. The president's former lawyer, Michael Cohen, alleged Mr. Trump directed him to take actions that violated campaign finance law.

"But what happened on Tuesday was that two of his closest associates were certified by our justice system as criminals, and one of them implicated Mr. Trump directly," Steyer said.

After Tuesday's events, most Washington Democrats are reluctant to talk about pursuing impeachment, as CBS News has reported. Steyer is the founder of a pro-impeachment group, Need To Impeach. His group has collected more than 5 million signatures calling for Mr. Trump's impeachment.

"Actually, what we're seeing is a Washington establishment that for its own reasons does not want to deal with the most political truth in our nation" — that being removing a "reckless, dangerous and lawless" president, Steyer said on CBSN.

"This is a question about protecting our system itself," he added, calling it a "question of patriotism."

Steyer, who plans to spend millions in the 2018 midterm cycle, said he's "very aware" of the need to get big money out of politics — but he's working with the system and laws that are in place.

"I'm completely transparent," said Steyer, adding that none of what he's doing "aggrandizes me."

Steyer himself hasn't ruled out the possibility of running for president in 2020. The day after Election Day this year, he said, he'll decide how he can be most useful. 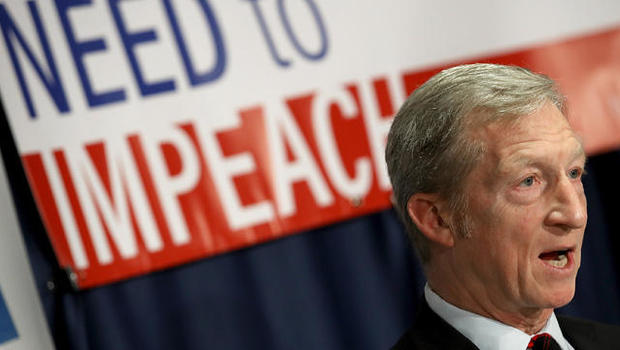